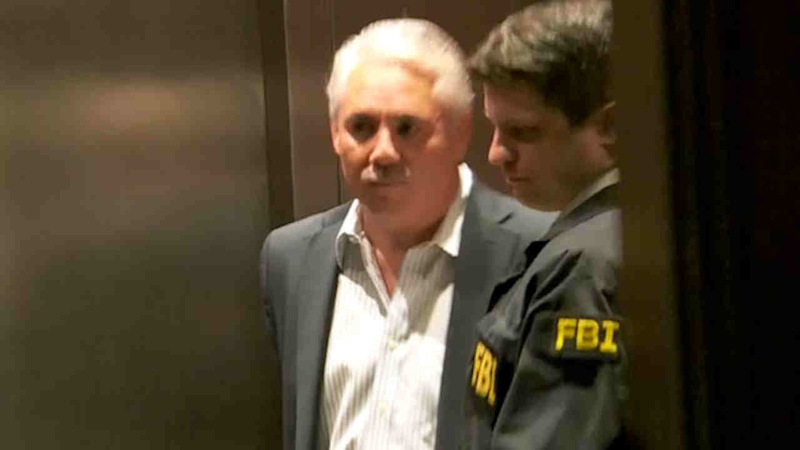 RIVERHEAD, N.Y. (WABC) -- The former Suffolk County chief of police is under arrest on charges he took revenge against a man who broke into his SUV by beating the suspect and then plotted to cover it up.

Ex-Chief James Burke was taken into custody by the FBI in Melville at his mother's house Wednesday morning.

Burke was charged in federal court with assault and obstructing an ensuing civil rights investigation. He pleaded not guilty and will be held in protective custody at federal jail in Brooklyn until a bail hearing Friday morning.

The indictment is the culmination of years of public allegations made by the suspect, 28-year-old Christopher Loeb, of Smithtown, following his December 2012 arrest.

U.S. Attorney Robert Capers said Burke influenced officers in his department to lie about what happened inside a police station. The prosecutor told reporters to "stay tuned" on whether further arrests were possible.

The charges stem from Loeb's Dec. 14, 2012 arrest for breaking into Burke's department-issued vehicle. The indictment alleges Burke assaulted Loeb in the interrogation room of the Suffolk County Police Fourth Precinct station house and then attempted to obstruct an ensuing federal civil rights investigation into the assault.

While Loeb pleaded guilty to stealing a duffle bag containing Burke's gun belt and ammunition, he has publicly maintained Burke and up to six other officers beat him while he was being held at the station house.

"At the time the defendant Burke entered the interrogation room and is to have alleged to have repeatedly punched and slapped Loeb about his body as Loeb was in custody and handcuffed," Capers said.

Prosecutors said Burke then pressured detectives to lie to federal agents who were investigating Loeb's claim about being assaulted.

"Shockingly, that agreement on the story also involved Burke having one of the detectives that was present on the precinct on the night of that assault testify falsely under oath in a pre-trial state court hearing, in which Loeb was charged with burglary, that Burke did not assault Loeb," Capers said.

The FBI launched a civil rights probe into the alleged assault in 2013.

Burke's attorney, Joseph Conway, said the accusations against his client are not valid.

"He has vigorously defended himself to date and will continue to do so," he said. "We believe the charges are unwarranted and will not stand up later in court."

Loeb, who is currently serving three years in prison, is now suing both Burke and Suffolk County for civil rights violations.

Other Suffolk County police officers involved in the incident have cooperated in the federal probe. None are expected to face charges.