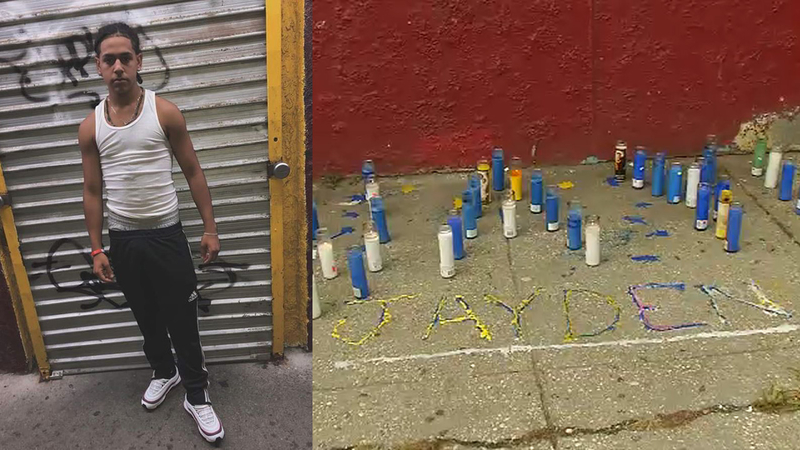 JERSEY CITY, New Jersey (WABC) -- There is a growing memorial in Jersey City after a 17-year-old was gunned down on the street Tuesday night.

The Jersey City Police Department received a 911 call of gunshots in the area of Old Bergen Road and Pamrapo Avenue just before 6:30 p.m.

Arriving officers found a male victim in front 23 Old Bergen Road with gunshot wounds to his head and neck. He was found in an apparent lifeless condition.

The victim, later identified as Jayden Fondeur, was rushed to Jersey City Medical Center, where he was pronounced dead at approximately 6:55 p.m.

Family and friends are mourning his death, and they say they do not believe he was not the intended target but just in the wrong place at the wrong time.

Video of the shooting shows Fondeur crossing near the intersection when a white car passes the location and people scatter. Fondeur tries to get away, but he goes down while showing no signs of life.

Police have been at the scene talking to family members all day, and they hope the video will give them some valuable clues as to who is responsible.

Meanwhile, a makeshift memorial has been set up on the corner, and many have stopped by to light candles and offer condolences. According to the victim's friend, Jaydon had a "big smile."

Family members were huddled outside the victim's home just around the corner from the El Mana Market, where the shooting took place in broad daylight. Fondeur's mother was too shaken to speak, but a family representative said there was nothing the teen could have done to deserve being murdered around the corner from his own home.

The Prosecutor's Homicide Unit is actively investigating this case, with assistance from the Jersey City Police Department.

Anyone with information is asked to contact the Office of the Hudson County Prosecutor at 201-915-1345 or to leave an anonymous tip at HudsonCountyProsecutorsOfficeNJ.org/homicide-tip/. All information will be kept confidential.