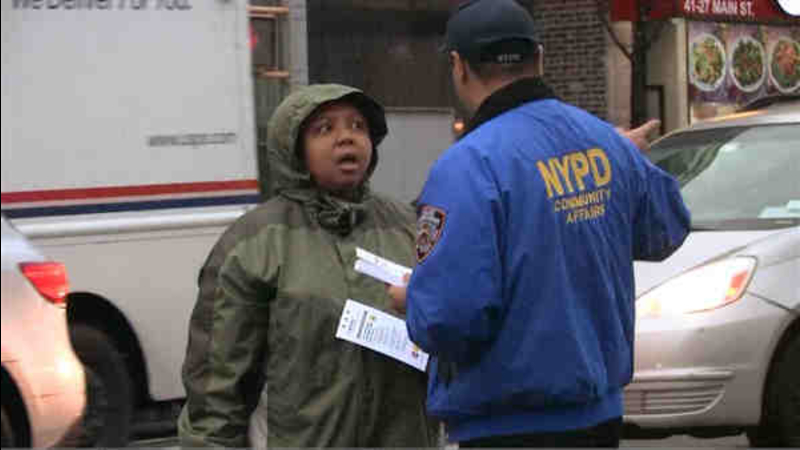 FLUSHING, Queens (WABC) -- In the wake of several pedestrian deaths, the NYPD announced thousands more officers are now cracking down on dangerous driving, while city officials stressed that pedestrians also have to do their part to stay safe.

South Street on the Lower East Side is one of many places across the boroughs where additional police are now out on the streets.

More than 1,700 officers are working more than 12,000 hours to crackdown on bad drivers.

Given the number of pedestrian fatalities in New York City in recent weeks, enforcement is badly needed.

It has been horrific.

More than a dozen pedestrians have been killed since Halloween. Three were killed at once in the Bronx and among them were a 10-year-old girl and her grandfather.

On the Upper West Side last Sunday, 88-year old Louisa Rosario was killed by a taxi driver. The taxi driver was so tired he didn't notice her in the crosswalk.

Now, Louisa's grandson is just hoping the new initiative can make a difference.

"Help us prevent these tragedies from occurring in such a unique and wonderful city that we all live in and work in," Luis Tejada said.

Meanwhile, in a separate initiative in Flushing, jaywalkers are now being warned, and then cited if they don't follow the rules.

Some people are suggesting that is taking the focus off the real problem.

"What we need the NYPD to do is to focus on the violations that are causing the death and injury, and that is speeding and failure to yield," said Paul Steely White, of Transportation Alternatives.

They say in some precincts, speeding enforcement is actually down compared to last year.

But given the scope of the recent fatalities, authorities are clearly attacking the problem on all fronts.