Everything you need to know about the immigrant family separation controversy 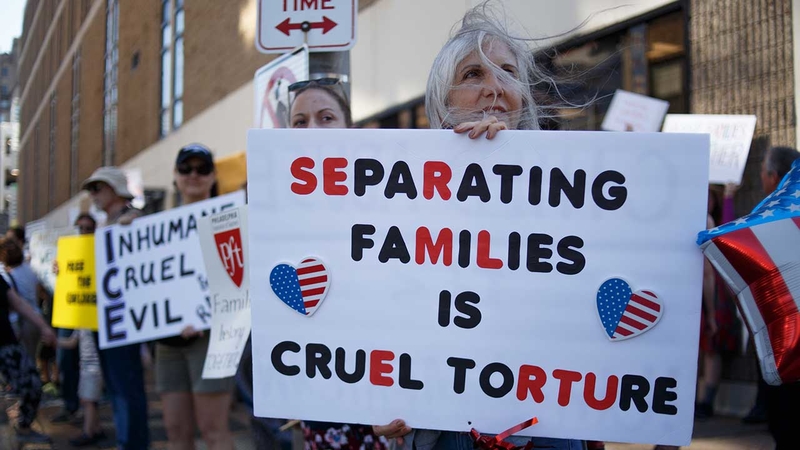 Immigrant family separation: Everything you need to know

Amid the controversy and fierce backlash surrounding the Trump administration's policies about separating migrant families, President Donald Trump has signed an executive order to keep immigrant families together, while still continuing their "zero tolerance" policy. The order is an about-face from the administration who strongly defended separating families in the days prior.

Here's everything you need to know about what the policy is, how we got here and what past administrations are saying.

HOW MANY CHILDREN HAVE BEEN SEPARATED FROM THEIR FAMILIES?

1,995 children were separated from 1,940 adults at the U.S.-Mexico border from April 19 to May 31, according to figures obtained by the Associated Press.

IS THERE CURRENTLY A ZERO TOLERANCE LAW?

There is no law requiring families to be separated at the border, despite comments last month from Attorney General Jeff Sessions stating that those entering illegally with a child would be separated "as required by law."

The current policy, as explained in an FAQ section on the Department of Homeland Security's website (updated last week), is that children and their parents may be separated "for several reasons, including situations where DHS cannot ascertain the parental relationship, when DHS determines that a child may be at risk with the presumed parent or legal guardian, or if a parent or legal guardian is referred for criminal prosecution, including for illegal entry."

WHAT IMMIGRATION LAWS ARE THE POLICIES BASED ON?

Clinton Administration: The 1997 Flores Settlement says unaccompanied children who are caught at the border can only be held in immigrant detention for up to 20 days (this was later expanded to include children accompanied by their parents). After that they must be released to their parents, adult relatives or other caretakers or the "least restrictive" setting, in that order. The Trump administration has said it wants to see the settlement overturned.

George W. Bush Administration: In 2008, President George W. Bush signed the Trafficking Victims Protection Reauthorization Act into law, which required unaccompanied minors from non-neighboring countries (all countries except Mexico and Canada) to be turned over the Department of Health and Human Services for resettlement within three days.

Obama Administration: In 2016, the 9th U.S. Circuit Court of Appeals ruled that child migrants who came to the border with parents and were held in custody must be released. The decision did not state parents must be released.

Neither the Flores Settlement nor the Trafficking Victims Protection Reauthorization Act states that children must be taken from their parents, and many argue that both were enacted to protect children.

WHAT ELSE HAS JEFF SESSIONS, THE TRUMP ADMINISTRATION SAID ABOUT THE IMMIGRATION POLICY?

March 2017 - Then-Department of Homeland Security Secretary John Kelly told CNN the administration was considering separating children from their parents "in order to deter more movement along this terribly dangerous network."

June 14, 2018 - Sessions defended the zero tolerance policy by citing the Bible, saying, "I would cite you to the Apostle Paul and his clear and wise command in Romans 13, to obey the laws of the government because God has ordained them for the purpose of order. Orderly and lawful processes are good in themselves and protect the weak and lawful."

June 15, 2018 - White House Press Secretary Sarah Sanders told reporters that children are being separated from their families because of existing laws, claiming "the president is simply enforcing them."

June 17, 2018 Secretary of Homeland Security Kirstjen Nielsen wrote that the Trump administration does not have a policy for separating families.

WHAT IS BEING SAID NOW?

Trump on Sunday and Monday tweeted out a series of statements about the controversy, claiming, among other things, that children were entering the country with "some of the worst criminals" and blaming the Democrats.

It is the Democrats fault for being weak and ineffective with Boarder Security and Crime. Tell them to start thinking about the people devastated by Crime coming from illegal immigration. Change the laws!

Children are being used by some of the worst criminals on earth as a means to enter our country. Has anyone been looking at the Crime taking place south of the border. It is historic, with some countries the most dangerous places in the world. Not going to happen in the U.S.

The Democrats should get together with their Republican counterparts and work something out on Border Security & Safety. Don’t wait until after the election because you are going to lose!

HOW ARE PAST PRESIDENTS AND FIRST LADIES REACTING?

On this Father’s Day I’m thinking of the thousands of children separated from their parents at the border. These children should not be a negotiating tool. And reuniting them with their families would reaffirm America’s belief in & support for all parents who love their children.

Former first lady Laura Bush wrote an op-ed in the Washington Post which compared the family separations to World War II Japanese-American internment camps. She wrote, "I live in a border state. I appreciate the need to enforce and protect our international boundaries, but this zero tolerance policy is cruel. It is immoral. And it breaks my heart."

Current first lady Melania Trump's communications director released a statement on Sunday that read, "Mrs. Trump hates to see children separated from their families and hopes both sides of the aisle can finally come together to achieve successful immigration reform. She believes we need to be a country that follows all laws, but also a country that governs with heart."