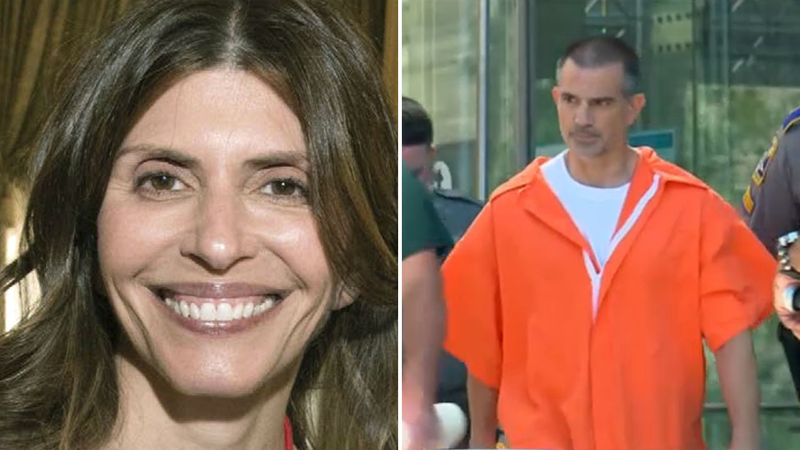 NEW CANAAN, Connecticut -- The estranged husband of a Connecticut mother of five who has been missing for more than a month appeared in court Wednesday at a status conference in the custody battle for the children.

Fotis Dulos and his girlfriend, 44-year-old Michelle Troconis, are charged with tampering with or fabricating physical evidence and hindering prosecution, and both have pleaded not guilty.
EMBED More News Videos

Joe Torres has more on the disappearance of Connecticut mother of five, Jennifer Dulos.

Previous court documents revealed that clothing and sponges soaked with Jennifer Dulos' blood were found in trash cans in Hartford, where surveillance cameras captured a male appearing to be Fotis Dulos wearing a baseball cap and disposing of garbage bags in more than 30 different receptacles along a four mile stretch of Albany Avenue.

"I just want to tell my children that they're constantly on my mind and that I love them and I miss them very much," Fotis Dulos said after court.

While there are several motions pending in the case, the hearing Wednesday was solely a status hearing to discuss a psychological evaluation that the court had ordered sealed on May 9.

Contents of the evaluation have been leaked, in violation of the order. The document is over 100 pages.

Norman Pattis, Dulos's criminal attorney, claimed that he was not aware of such an order. He claims that on the day Fotis posted bond, his new family attorney, Atty Rochlin, had gone to Fotis's house to look for his passport to surrender to court and found a copy of the custody evaluation in plain sight.

Then, on Friday night, Pattis said he received a call from New York Post and spoke about drug abuse and the manuscript Jennifer wrote, which led him to float the idea that her disappearance may have been in the style of the hit book and movie "Gone Girl."

Her family disputed that claim, with Carrie Luft, a spokeswoman for Jennifer Dulos' family, calling Pattis' suggestion "false and irresponsible."

"Drawing any comparison to a work of fiction does an incredible disservice to the family, especially to the children," she said. "This is not a novel. This our real life."

Pattis said there will be no further proceedings for the next several weeks, as the defense pursues what he called several leads.

"You heard us say today in court comments that Jennifer made to Mr. Dulos that give us grave concern for her safety and well being," he said. "We are actively contemplating a revenge suicide hypothesis as an explanation for her disappearance."

Pattis went on to say he spoke with state's attorney, Rich Colangelo, Wednesday morning because Fotis Dulos wants to cooperate in the investigation and waive his right to the 5th Amendment.
Pattis argued access to this custody evaluation is necessary to speak about so the state can corroborate Fotis' statements.

It was a heated and contentious hearing, with Pattis and Jennifer's divorce attorney, Reuben Midler, sparring over almost everything. Midler claims this is a family case and not a place for Fotis to establish his criminal case.

Midler said he is appalled by what has gone on with respect to the report.

The judge ruled that no one needs a copy of the report at this time. Attorneys will be able to read the report and take notes in the presence of the guardian, but they can not speak about contents of the report.