Jersey City shooting: The scene on the streets 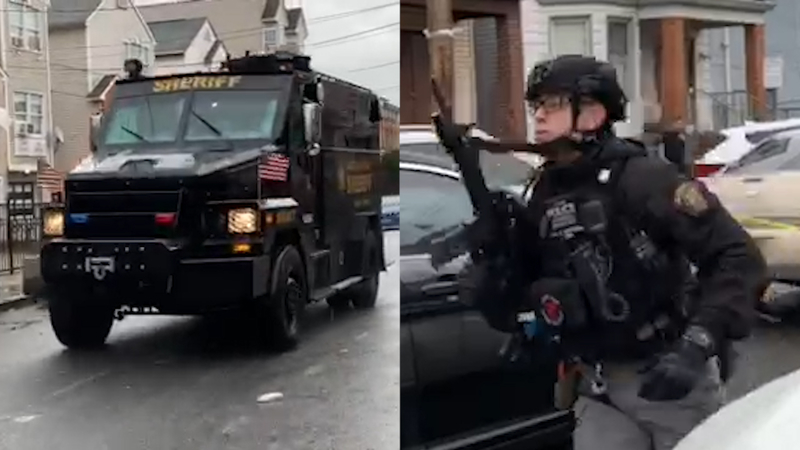 The shooting in the area of Martin Luther King Drive sparked a massive response included resources from neighboring municipalities, as well as the FBI.

Sporadic, heavy gunfire rang out over the course of at least an hour along a major thoroughfare.

SWAT teams, state police and federal agents responded to the scene, and police blocked off the area, which, in addition to the school, has some stores, a kosher supermarket and a hair stylist.
EMBED More News Videos

Jersey City schools with tens of thousands of students were locked down for hours.
Student at nearby school describes gunshots, lockdown:

Darla Miles spoke with an 8th grader whose school was locked down during the shooting.

Video shot by residents recorded loud volleys of gunfire reverberating along one of the city's main streets and showed a long line of law enforcement officers pointing guns as they advanced, yelling to bystanders, "Clear the street! Get out of the way!"

" It's like firecrackers going off," said Andy Patel, who works at a liquor store about three blocks away. "They were shooting like crazy. ... The cops were clearing everyone off the streets."

Anayah Bey was parking her car in front of the supermarket when the first shots were fired. She started recording on her cell phone as she ran for cover.

"Watching watching and listening to all the gunshots going and there was so many officers on the roofs and everything with their guns drawn," she said.

Bey took cover, but her biggest concern wasn't her own safety, it was the safety of her three children who were inside her apartment three doors down.

"I had to call my children make sure they're ok, make sure they stay close to the ground and away from the front of the house where the gunshots was going," she said.

She said it's a conversation she shouldn't have to have with her children. "I'm born and raised here in Jersey City and this is the worst it's ever been," said Bey.

Many people who live near the scene of the fatal shooting still weren't allowed to go back home Tuesday evening.