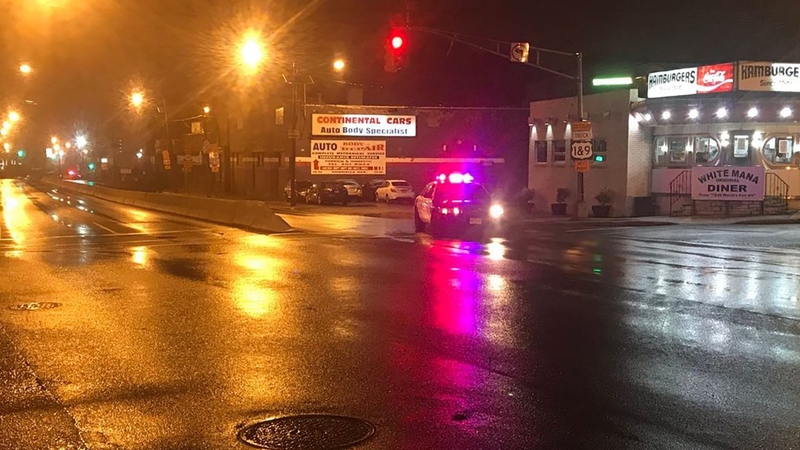 JERSEY CITY, New Jersey (WABC) -- A car that police were attempting to pull over crashed and caught fire in Jersey City late Sunday, sending six people to the hospital.

Police attempted to stop the vehicle at Ocean and Cator avenues just after 11:15 p.m. Authorities say the driver fled, with the vehicle continuing on Tonnelle Anenue with officers in pursuit.

As the suspect fled, police say he was involved in at least two separate automobile crashes. The first crash occurred as the driver attempted to drive between two lanes of traffic while travelling on Tonnelle Avenue. At that point, Jersey City police officers fired multiple shots at the suspect.

Several blocks later, the driver crashed into a utility pole, causing a fire and injuring an innocent man victim who was also driving on Tonnelle Avenue. That victim was transported by Emergency Medical Services to the burn center at St. Barnabas Medical Center in Livingston, where he is listed in critical but stable condition with severe burns to his body.

"I saw two cars, one was completely up in flames," witness Tom Evans said. "There was a car next to that one that was also starting to catch on fire, but there was a guy in the driver's seat that the cops were trying to pull out of the car."

The driver, 48-year-old Leo Pinkston, is charged with one count of eluding and one count of aggravated assault.

"Our thoughts and prayers go out to the innocent victim and his family," Hudson County Prosecutor Esther Suarez said. "We will utilize all resources available to the Prosecutor's Office for a full and thorough investigation as we seek to bring this matter to a rightful conclusion."

Tonnelle Avenue was closed in both directions from Secaucus Road to the Pulaski Skyway for the investigation.