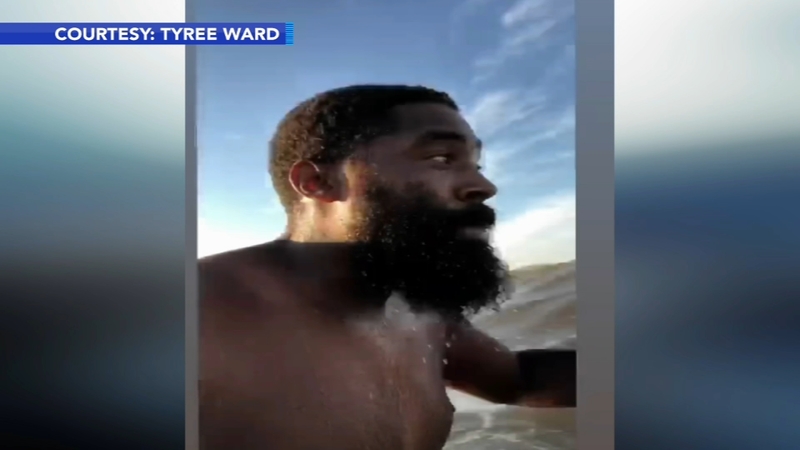 PHILADELPHIA -- A Philadelphia man is being hailed an "instant hero" for his quick work rescuing a woman who was drowning in the water at a beach in New Jersey.

Officials said the woman would not be alive if not for Tyree Ward's selfless act.

Ward said anyone would have done it, but emergency officials pushed back saying not everyone is as selfless and brave as Ward.

This all happened Sunday night at a beach in Wildwood, New Jersey, just after 8 p.m.

It was late and there were no lifeguards on duty. That's when Ward heard screaming. A woman was crying out that her friend was drowning.

Swimming safety: How to keep you and your family safe at lakes, rivers and swimming holes
EMBED More News Videos

There have been several deaths at popular Triangle lakes, rivers and swimming holes this year.

He dropped his towel and phone and jumped in.

"I thank God that He put me there," Ward said. "Everything just happened the way it did. Nobody but the Lord that put me in that place."

He hopes this will inspire others to look beyond themselves.

"Somebody has to do something," he said. "You just jump in and you just have to follow your gut sometimes."

Ward is an auto mechanic and tow truck driver in Philadelphia.

He was on the beach with his family when this happened.

He was able to swim out to the 20-year-old woman and bring her to shore. Emergency crews met them close to the shore and jumped in to help.

"He saved her life, absolutely," Wildwood Fire Chief Ernie Troiano III said. "When time is of the essence, his timing was impeccable. He was truly in the right place the right time, and he had what it took to get the job done. He didn't hesitate. He didn't wait to call for help. He sprung into action and it was truly a lifesaving measure."

The Wildwood Fire Department presented Ward with tokens of their appreciation.