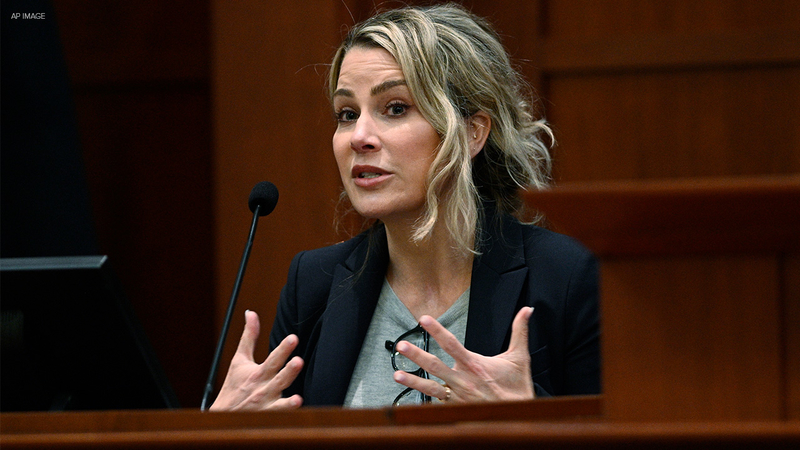 FAIRFAX, Va. -- A forensic psychologist testified Tuesday that actor Amber Heard suffers from borderline personality disorder and histrionic personality disorder, as the civil lawsuit between her and ex-husband Johnny Depp continues to wallow in the couple's personal issues.

Depp is suing Heard for libel in Fairfax County Circuit Court after she wrote an op-ed piece in The Washington Post referring to herself as "a public figure representing domestic abuse." The article doesn't mention Depp by name, but his lawyers say the article contains "defamation by implication" because it clearly refers to allegations of domestic abuse made by Heard when she filed for divorce in 2016.

The psychologist, Shannon Curry, was hired by Depp's legal team. She said she reached her diagnosis during 12 hours of interviews with Heard, as well as from reviewing her mental-health records.

Curry also testified that Heard does not suffer post-traumatic stress disorder from her relationship with Depp, as Heard has claimed.

Depp's team hopes Curry's testimony bolsters their contention that Heard was the aggressor in the couple's troubled relationship. Depp just concluded four days on the witness stand and testified about Heard's "need for conflict" and her tendency to hound and pursue him during arguments when he tried to walk away and disengage.

The two personality disorders are similar, Curry said. Borderline personality is a disease of instability, she said "driven by an underlying fear of abandonment." She said people with the disorder "will make desperate attempts to prevent that from happening."

Actor Johnny Depp scoffed at the notion during court testimony Wednesday that his constant quarrels with ex-wife Amber Heard would ever prompt him to hit her, and insisted on cross-examination that her allegations devastated his career.

Evidence introduced earlier at the trial includes audio clips of Heard begging Depp not to leave, and to stay with her after he indicated a desire to break up or separate.

She also said that borderline personality disorder "seems to be a predictive factor for women who implement violence against their partner." Depp has said he is the one who was a victim of domestic violence, and that Heard hit him on multiple occasions and threw items like paint cans and vodka bottles at him.

Histrionic personality disorder, Curry said, is associated with "drama and shallowness," and a need to be the center of attention.

She said there's a correlation in the disorder with people who are physically attractive and "utilize their looks to get that attention."

Johnny Depp testifies in defamation case against Amber Heard: 'I am obsessed with the truth'
EMBED More News Videos

Actor Johnny Depp took the stand Tuesday in his libel lawsuit against his ex-wife Amber Heard, saying her domestic abuse allegations against him were disturbing, heinous and "not based in any species of truth."

On cross-examination, Heard's lawyers questioned Curry for potential bias, noting that she had dinner and drinks with Depp and his lawyers at Depp's house before she was hired. Curry said it was just part of the interview process.

And Heard's lawyers called attention to evidence that Heard reported abuse contemporaneously to her therapist and to the couple's marriage counselor.

While the libel lawsuit is supposed to center on whether Depp was defamed in the article, most of the trial has focused on ugly details of the couple's brief marriage. Depp has denied ever striking Heard. Heard's attorneys say Depp physically and sexually abused her and that Depp's denials lack merit because he was often drunk and high to the point of blacking out.

Earlier Tuesday, jurors heard testimony from Tara Roberts, who managed Depp's private island in the Bahamas. She testified that she never saw Heard with any kind of bruises. Her testimony also provided another window into some of the extravagances of Depp's lifestyle.

She said she was paid $120,000 to manage the island, where Depp tooled around on a John Deere utility vehicle. The island had a four-person staff, including Roberts, though Depp was only there a few times a year. One section of shoreline on the island was dubbed Brando Beach, for the actor with whom Depp had collaborated in the past.

Roberts also testified about an incident that occurred when Depp and his family had a final excursion on a yacht before it was to be sold to author J.K. Rowling. On cross-examination, Roberts acknowledged that Depp passed out face-first in the sand, and that she arranged for a helicopter to take some passengers away after the yacht trip turned unpleasant.

A former personal assistant to Amber Heard says she never saw the actress suffer any physical abuse at the hands of Johnny Depp, and said Heard once spit in her face when she asked for a raise.

Earlier testimony has centered on activities that occurred in the five penthouses Depp owned atop the Eastern Columbia Building in Los Angeles.

The final witness Tuesday, Los Angeles police officer Melissa Saenz, testified about her visit to the building in May 2016, just days before Heard filed for divorce and showed up at a courthouse to seek a restraining order with a large mark on her face that she says came from a fight with Depp that night.

The officer, testifying through a recorded deposition, said she saw that Heard had been crying but saw no evidence of an injury - Depp's lawyers say Saenz's testimony is evidence that Heard faked her injury to damage Depp's reputation.

Saenz could not recall many details of her interactions with Heard that night, but she did "remember being impressed by the penthouse, how big and beautiful it was."

Johnny Depp and ex-wife Amber Heard return to court Wednesday, facing off in their contentious trial centered on a $50 million defamation suit.