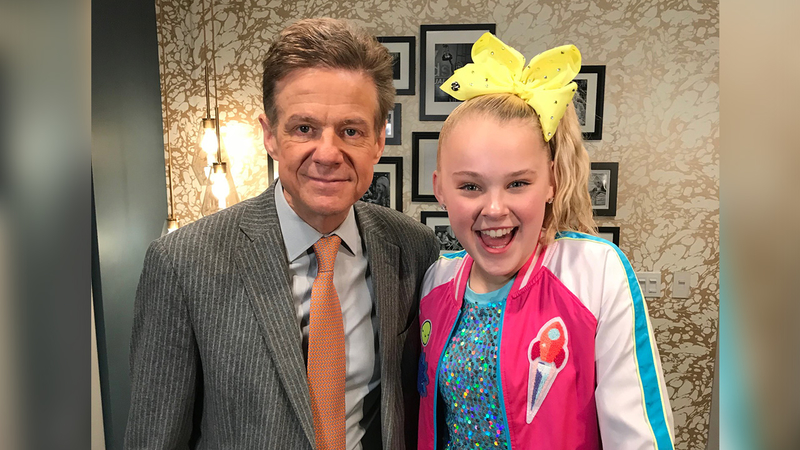 NEW YORK CITY (WABC) -- Among the dozens of performers appearing in this week's Macy's Thanksgiving Day Parade is one 14 year old who is building an empire on social media.

JoJo Siwa is one of a new breed of stars who are called "influencers" for reasons that quickly become obvious. Her new book is called "JoJo's Guide to The Sweet Life" and for her life is sweet indeed.

If you don't know JoJo, then you're probably not a parent of a pre-teen girl. She has 5 million YouTube subscribers and more than 6 million followers on Instagram.

Her video to her song "Boomerang" has been watched about 400 million times.

"Won't let the haters get their way," JoJo sings, "I'm a gonna come back like a boomerang."

Her point is that the best way to deal with bullies is to make like a boomerang and bounce back. It's a message that resonates with her young fans.

"They just hear those lyrics, and they're like 'OK, so she gets it, and she know how to help us," JoJo told me during a visit to the WABC-TV studios adding, "My whole thing is just be yourselves and just have fun."
JoJo urges her fans to buy one of her signature bows as a badge of honor explaining, "if you're at school, and you see someone who has a JoJo bow in, you know that they're gonna be nice."

Her new book charts her rise, which began when JoJo started dancing as a two year old.

The toddler just kept going and eventually landed on Lifetime's "Dance Moms" reality show, but it is social media that has made her a star.

A downside of fame is she gets her share of hateful comments. The young singer/dancer can block and delete those haters and she told me, "Mom will go through and filter the comments too so I don't see them. She protects me from it, but even if I do see them, I've just learned I'm myself. If you don't accept me for who I am, it's totally fine."

JoJo hails from Omaha, Nebraska, but now lives in LA with her mom where, in between public appearances, she is home schooled and hasn't been in a regular classroom with regular kids since she was in 3rd grade.

I asked her if she missed the rituals of junior high high school.