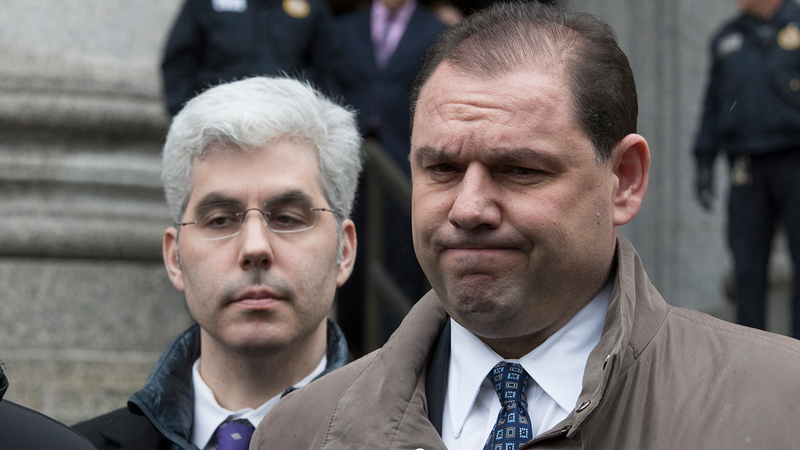 NEW YORK -- A former aide so close to New York Gov. Andrew Cuomo that he considered him like a brother was sentenced to six years in prison Thursday for fraud and accepting bribes. The judge said she hopes the punishment "will be heard in Albany."

She said those seeking the modest salaries of government jobs should not seek to supplement their incomes by accepting bribes.

"If you do so, this court will show you no mercy," she said.

Percoco, 49, was convicted in March of accepting more than $300,000 from companies that wanted to gain influence with the Cuomo administration.

The conviction was an election-year embarrassment for Cuomo. His opponents say it proves the two-term Democrat hasn't done enough to address chronic corruption in state government, even within his own administration.

Prosecutors had asked Caproni to sentence Percoco to well over five years in prison. His lawyers said he should get no more than two years.

Cuomo wasn't accused of wrongdoing, but testimony presented an unflattering picture of the inner workings of his office.

In a statement after the sentence was announced, Cuomo said: "Joe Percoco is paying the price for violating the public trust. And it should serve as a warning to anyone who failed to uphold his or her oath as a public servant. On a personal level, the human tragedy for Joe's young children and family is a very sad consequence."

In a court filing, Percoco's lawyers wrote that his punishment has already begun.

"The trial - which played out on the pages of virtually every newspaper and media outlet in New York - has all but destroyed Joe's life. Joe faces impending bankruptcy and a substantial term of incarceration," they wrote.

In court, Percoco told Caproni he wanted to "express how sorry I am for my actions."

Outside court, Percoco declined to comment, walking away as he was asked if he had remorse.

His lawyer, Barry Bohrer, said outside court that it was a "difficult day in court." He vowed to appeal.

"We had hoped for better. Obviously it is not the sentence we requested but it wasn't the sentence the government requested either. Mr. Percoco is a man of strength and a man of faith. He has faith in the system and we are hopeful that our appeal will be successful," Bohrer said.

Prosecutors in pretrial submissions had called on Caproni to send a message to state officials.

"As the Court is aware, and all too sadly, Percoco's trial exposed wrongdoing at high levels of state government that is hardly aberrant. Recent prosecutions and trials in this district have laid bare the ugly truth that, too often, political power and responsibility in New York leads to political corruption," they wrote.

After the sentence was announced, U.S. Attorney Geoffrey S. Berman said in a statement that the punishment "sends a strong message that public officials who violate their duties to faithfully serve the citizens of New York will be held accountable for their corrupt actions."

"We have either incompetence or corruption," she said. "Which is it?"

The scandal didn't substantially hurt Cuomo with Democrats. He won in a landslide. But his Republican opponent in the general election, Dutchess County Executive Marc Molinaro, has picked up the cudgel, asking police to investigate Percoco's use of a state office and telephone while he was leading Cuomo's 2014 re-election bid.

Percoco plays a big role in Molinaro's "Cuomo Corruption Tour," a series of campaign events that he launched last week.