Judge delays rollback of restrictions at border for asylum seekers 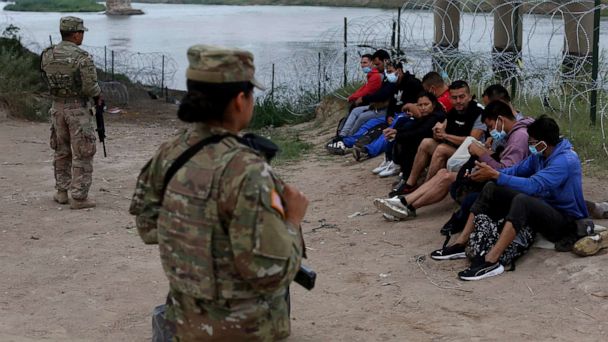 A federal judge in Louisiana on Friday ordered the Biden administration to continue implementing pandemic-related restrictions at the border that effectively close humanitarian relief options for asylum seekers.

The restrictions were slated to end on Monday.


The restrictions were first implemented under the Trump administration by the Centers for Disease Control and Prevention which issued an order that derives its authority from a decades-old public health law known as Title 42.

The White House said it "disagreed" with the decision but would comply with it.

"The authority to set public health policy nationally should rest with the Centers for Disease Control, not with a single district court. However, in compliance with the court's injunction, the Biden Administration will continue to enforce the CDC's 2020 Title 42 public health authority pending the appeal," White House press secretary Karine Jean-Pierre said in a statement.

The Department of Justice announced in a statement that it would appeal the ruling.

"The Centers for Disease Control and Prevention (CDC) invoked its authority under Title 42 due to the unprecedented public-health dangers caused by the COVID-19 pandemic. CDC has now determined, in its expert opinion, that continued reliance on this authority is no longer warranted in light of the current public-health circumstances. That decision was a lawful exercise of CDC's authority," the statement said.

The ruling today grants the GOP-led states' motion for a preliminary injunction against the Title 42 rollback. The injunction is expected to remain in place until the case concludes, the government fixes its approach or until the government gets a more favorable decision on appeal if one is made.

The decision by Judge Robert R. Summerhays, a Trump appointee, comes as the Biden administration's homeland security apparatus remains strained by a historic level of unauthorized migration in the southwest.


The ACLU previously secured a separate court order as part of a different Title 42 legal battle which bars families from being sent back to persecution and torture starting Monday.

"Currently under Title 42 there are no meaningful screenings," the ACLU's Lee Gelernt said Friday. "To the extent the government says there are screenings, the process is totally illusory because one has to know to ask for it and in any event they are only for torture, not persecution. As a result there have been very few screenings."

Gelernt, the ACLU's lead attorney on the Title 42 case in D.C., has fought Title 42 for the past two years. While authorities at the border currently employ case-by-case assessments to determine if migrants are subjected to Title 42 or traditional immigration processing, the ACLU argues those screenings are insufficient.

"The Louisiana ruling is wrong and is a transparent attempt by those States to end asylum," Gelernt said. "Those states care about COVID restrictions only when it concerns asylum seekers. How quickly the administration takes steps to undo it will tell us a lot about whether the White House truly wants Title 42 to end."

Immigration authorities arrested and stopped migrants 234,088 times along the southwest border last month, the highest monthly total in the reams of publicly available Customs and Border Protection data. That number includes a 183% increase in the number of inadmissible migrants trying to get through U.S. land ports since March.

It's unclear what impact the use of Title 42 has on overall migration, despite claims from Republicans in Congress that it works as a successful deterrent.


Suspected unlawful entries at the border have come at a record pace over the past two years that the Title 42 order has been in effect. Meanwhile, the number of repeat border crossing attempts is up nearly fourfold since the first year the Title 42 was implemented.

One explanation behind the increase in repeated unlawful entries is the lack of long-term consequences for those processed and immediately expelled from the U.S. Under normal immigration processing, an order of removal comes with specific restrictions on re-entry and prosecutable consequences for those who try again.

Homeland Security Secretary Alejandro Mayorkas held meetings with top immigration officials at the border this week as he oversees preparations the department is taking in case the level of migration elevates further. At a press conference to discuss the trip he noted the Justice Department will decide whether to appeal the Louisiana court's decision.

Mayorkas this week outlined the Department's plan for the border transition away from Title 42 which involves surging homeland security resources, improving processing capacity and efficiency, ramping up consequences for increased border crossings, cracking down harder on transnational criminal smuggling networks and strengthening alliances across Central and South America.

"We have a multi-pronged approach to a very dynamic situation," Mayorkas said. "We are addressing it across the Department of Homeland Security, across the federal government with our state and local partners, and with our partners and allies south of our border."

Mayorkas said authorities will be increasing criminal prosecutions along the southwest border to apply the sort of consequences that Title 42 does not allow, including multi-year bans on re-entry for unauthorized migrants.