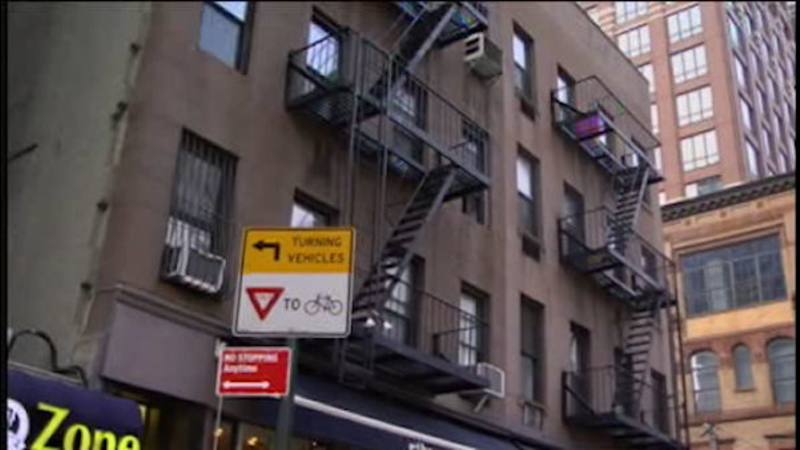 EAST SIDE, Manhattan (WABC) -- A 71-year-old woman was seriously injured when a jumper who leaped from a third-floor window landed on her Friday afternoon.

People who live and work in the area say they still can't shake the disturbing images from their minds.

According to police a woman who lived on the third floor of the 1st Avenue apartment, jumped from her window and fell on top of another woman walking along the sidewalk forever changing both their lives.

"I heard a man scream and as soon as I turned," said Andre Ferrier, an eyewitness. "I was literally about ten feet away from the woman when she hit the ground."

It happened so fast, and before anyone could think or even react, eyewitnesses say they were helpless.

Ferrier was riding his bike near E. 51st and 1st Avenue just after 3 p.m. Friday when he heard someone scream and what he saw next was horrifying.

According to police, a 56-year-old woman jumped from her 3rd floor apartment window and fell on top of another 71-year-old woman walking down the street.

Eyewitnesses say the jumper's husband and several others quickly rushed outside to help.

"I jumped into action I was actually the person who called the ambulance," a witness said.

The 71-year-old victim was taken to nearby Cornell University Hospital with serious but non-life threatening injuries.

Authorities say the other woman was rushed to Bellevue where she later passed away.

"She was a very sweet woman, very sweet, and she used to come in and sit down and talk," said Ann Reilly, a neighbor.

Reilly has been neighbors with the woman who jumped for years, but says she never thought something like this could happen.

"I was sick, I got depressed and my brother was upset, we were all upset, we never thought of something like that somebody jumping out the window like that," Reilly said.

"I'm very sorry to hear that, that was one of the most traumatic things I've ever seen," a witness said.