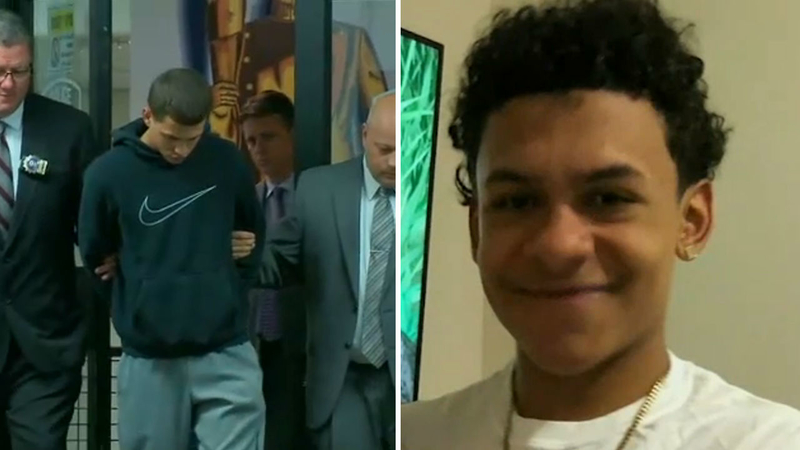 NEW YORK (WABC) -- It was an emotional day in court as the murder trial for 15-year-old Lesandro "Junior" Guzman-Feliz continues and details of the prosecution's star witness' plea deal were revealed.

Junior's mom arrived in court feeling upbeat after the prosecution's star witness took the stand Monday. But then video of her son's heinous murder was played yet again for the courtroom -- leaving her in tears.

Leandra Guzman arrived in Bronx criminal court Tuesday and thanked friends and supporters a day after the prosecution called Kevin Alvarez to the stand to flip on his co-defendants. Alvarez said he was a gang member who helped murder Junior.

But then surveillance video of the teen's brutal murder was played again for the jury and courtroom in painful slow motion.

Junior's mother and his entire family turned away with their heads between their knees, quietly crying throughout.

Video of Junior’s murder played again in court in slow motion. Junior’s mom with their heads between her knees, cried quietly throughout. #JusticeForJunior pic.twitter.com/APqZ2k8Odh

Meanwhile, the mother of one of the defendants showed her displeasure with the press.

As for Alvarez, the star witness testifying that after butchering Junior, he and fellow gang members looked at a photo of the rival gang they were targeting, but were unsure Junior was among those in the picture.

He pleaded guilty to manslaughter and conspiracy and faces 25 years in prison. Under the agreement, he will be sentenced to time served and charged only with conspiracy.

Christopher Carrion is a legal analyst who has been observing the proceedings.

"This is a huge deal. We saw some of the other witnesses that put out some testimony that could be considered a little boring, hyper-technical," Carrion said. "But this witness, he's tying all of those pieces together."

Alvarez also testified that his former gang members have been ordered to murder him on sight.