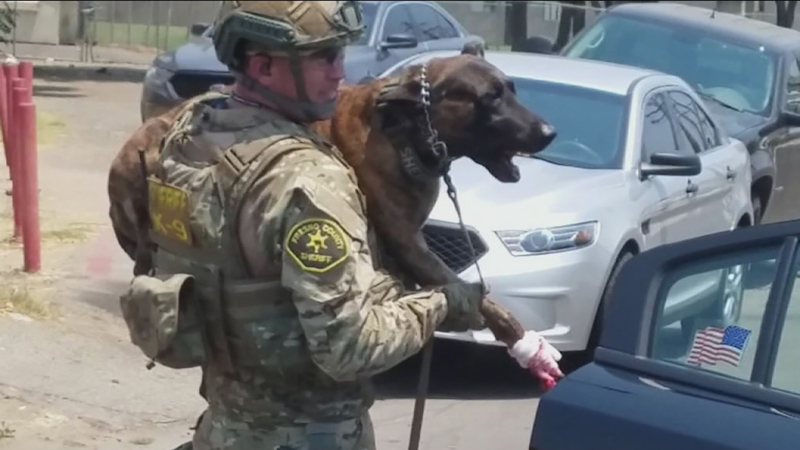 FRESNO, California -- A California police dog is back on duty after being shot in July.

K-9 Mikey and his handler, Fresno County Deputy Sheriff Jerry Kitchens, are again working together, a task that would have seemed impossible a month ago. Mikey was shot in the paw while on duty, leaving him forever changed.

"You can see two toes, he did lose two, he lost the two outer toes," Kitchens said.

The 6-year-old Dutch shepherd lost the toes after a dog attacked him while a search warrant was being conducted.

"The other dog was actually biting and actually had a hold of Mike's neck and face," Kitchens said.

Then, gunfire rang out.

"I saw his foot explode," Kitchens said. "I knew that he did have to control the blood loss, so I grabbed his foot and tried to put pressure on it."

Once the situation was resolved, reality set in.

"As the day kind of started winding down, that is when the emotions started to set in," Kitchens said. "That is when I obviously knew that he probably was not going to return to work."

After four long months and several cast changes, Mikey is back on duty.

"He is the way he was, minus two toes," Kitchens said.

Mikey has been with the sheriff's office for three years, and now that he's recovered, he can serve for many years to come.
Report a correction or typo
Related topics:
dog attacksheriff
Copyright © 2021 KFSN-TV. All Rights Reserved.
More Videos
From CNN Newsource affiliates
TOP STORIES