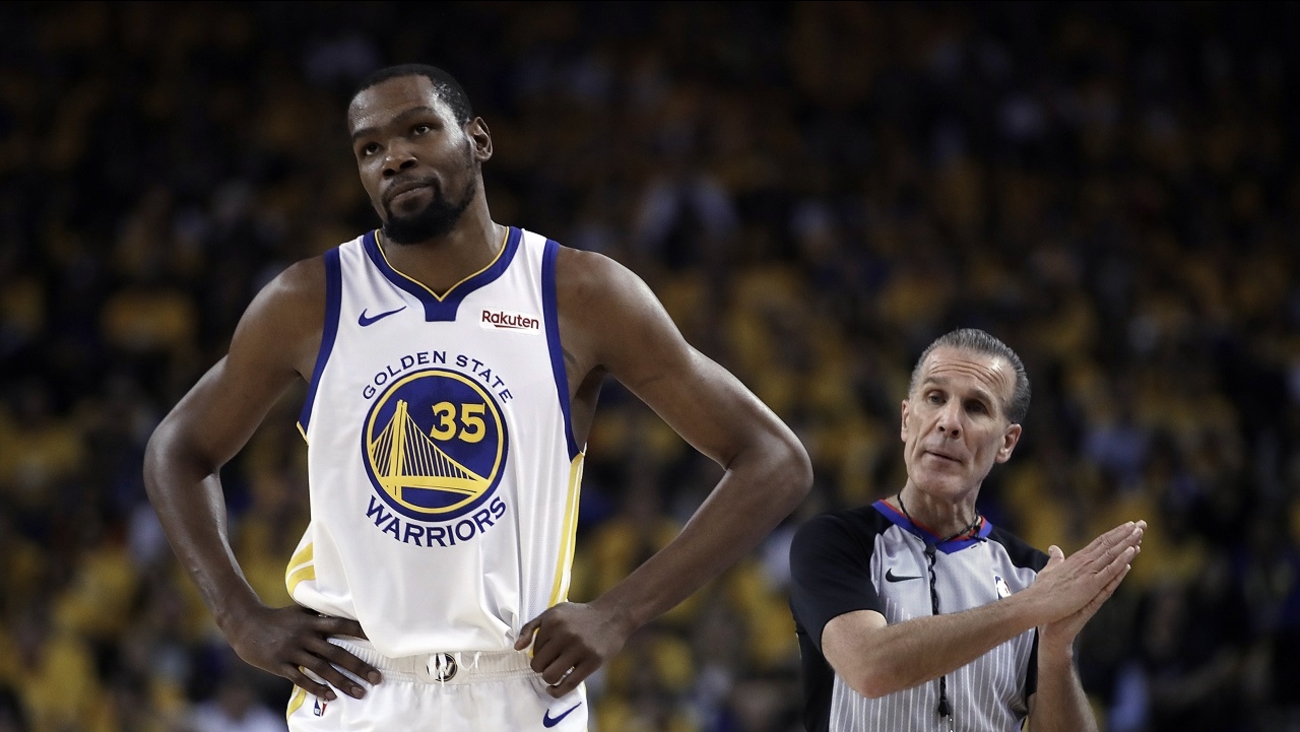 His decision was announced Sunday at the start of the NBA free agency period on the Instagram page for The Boardroom, an online series looking at sports business produced by Durant and business partner Rich Kleiman.

Durant won titles with Golden State in 2017 and '18 then was injured for much of the postseason this year as the team lost the NBA Finals in six games to the Toronto Raptors.

A ruptured right Achilles tendon could keep him out the entire next season, and whenever he returns it will be in the Brooklyn black.

And he'll be joined by Kyrie Irving and DeAndre Jordan, his 2016 U.S. Olympic teammates who also agreed to deals with the Nets on Sunday.

ESPN first reported Durant's decision, saying he had agreed to a four-year deal worth $164 million. Durant could have gotten five years and about $221 million to remain with the Warriors.

Durant, a 10-time All-Star who just completed his 12th NBA season, was leading all postseason scorers at 34.2 points per game when he strained his right calf on May 8 in Game 5 of the Western Conference semifinals against the Rockets. He had seven 30-point performances during the recent playoffs.

It's unclear how he will play whenever he can return, but the Nets were willing to take a chance with a team on the rise.

Brooklyn finished 42-40 this season and lost in the first round of the playoffs, then got a huge victory Sunday when it beat out the Warriors, New York Knicks and Los Angeles Clippers for Durant.

Durant, who grew up in the Washington area and spent one college season at Texas, played his first year with the Seattle SuperSonics before they departed for Oklahoma City, where Durant played eight seasons with the Thunder before joining the Warriors in 2016.

He was heavily criticized for that move, seen as taking an easy route by joining a team that had just won an NBA-record 73 games. But it worked out for Durant and the Warriors, as he was the NBA Finals MVP in their championships in both 2017 and 2018.

This season was filled with talk of his future - sometimes to Durant's annoyance - though for much of the season it was focused on the Knicks if he decided to leave. But the Nets became a more attractive option with young talent that should help them be competitive next season even while Durant recovers.

The Warriors will have to move on without Durant, who had three games with 45 or more points in the postseason before getting hurt. They still have Stephen Curry, Draymond Green and were expected to re-sign Klay Thompson, though he will miss much or all of next season after tearing an ACL in the NBA Finals.

The bigger disappointment may be for the Knicks, who had cleared enough money to sign two maximum salary free agents when they traded Kristaps Porzingis during the season. The hope was that Durant would be one of them, but instead he will end up a few miles across the river with a team that could be poised to be the dominant team in the city for years.
Report a correction or typo
Related topics:
sportsnew york citykevin durantbrooklyn nets
Copyright © 2022 by The Associated Press. All Rights Reserved.
TOP STORIES
Mother of Burger King employee killed makes sorrowful plea
Driver arrested after 15-year-old girl killed by school bus in NYC
How much snow fell across the Tri-State
Suspect shot, cop suffers concussion during incident in Yonkers
AccuWeather: Sunshine returns, cold
Woman killed in deadly subway attack was advocate for homeless
Retired Staten Island ferry up for auction after price slash
Show More
Friends, family searching for NJ dad reported missing in New Orleans
Daily COVID-19 cases in New York continue to go down
Crews rescue man on motorcycle, witnesses who fell through ice in NJ
Volunteers pay tribute to MLK through food drive in NJ
Catch first full moon of 2022 Monday night
More TOP STORIES News