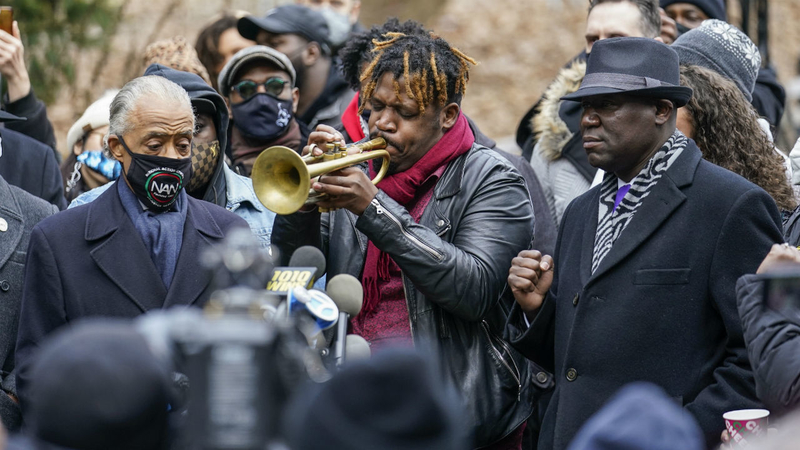 SOHO, Manhattan (WABC) -- A rally was held Wednesday in support of a Black teenager who was falsely accused of stealing a cell phone at a Manhattan hotel, where he was staying with his Grammy-winning father.

The encounter 14-year-old Keyon Harrold Jr. and his father had with the woman at the Arlo Hotel in SoHo went viral, with the family's attorney calling for the woman to be arrested.

Police are trying to track her down, saying she has been identified and lives out of state, and she could face charges ranging from assault to attempted robbery.

The Rev. Al Sharpton joined prominent attorney Ben Crump and the family at the rally, explaining the implications of what happened, the fact that it could have been so much worse, and the need for accountability.

"When I saw this story, I thought about how I was one of those kids whose father never took him anywhere for Christmas, never had brunch with my father," Sharpton said. "And for this Black man to take his Black son, put him in a hotel during a pandemic, and spend Christmas with him, raising him, and to be assaulted because of the color of their skin, I wanted to stand with this man and this woman who provided for their son, and they're being criminalized for it. The arrogance and audacity of this woman."

The video shows the woman falsely accusing the teen of stealing her phone and then lunging at him and his father while trying to grab his phone. Keyon Harold Sr. says she scratched him as he tried to protect his son.

"This could have gone very wrongly if I had come down after my son," he said. "The idea of trauma goes above any charge that we may have...I bring my son places where he shouldn't have to deal with injustices and shouldn't have to be profiled."

The teen's mom, Kat Rodriguez, said she does not appreciate the way the hotel handled it, claiming employees allowed the woman to leave after they witnessed the altercation without ever giving her son the benefit of the doubt.

"All that we are asking is for the police to do the right thing, for the DA to do the right thing, to charge this woman with assault," she said. "To the hotel, which I'm equally angry at, you are trained to use those tools. I called the hotel right after it happened, and I gave them a chance to make it right, and they didn't. You know when they made it right? When my tribe, my community spoke up."

Keyon Harrold Sr. played "America the Beautiful" and "We Shall Overcome," drawing applause and a few tears.