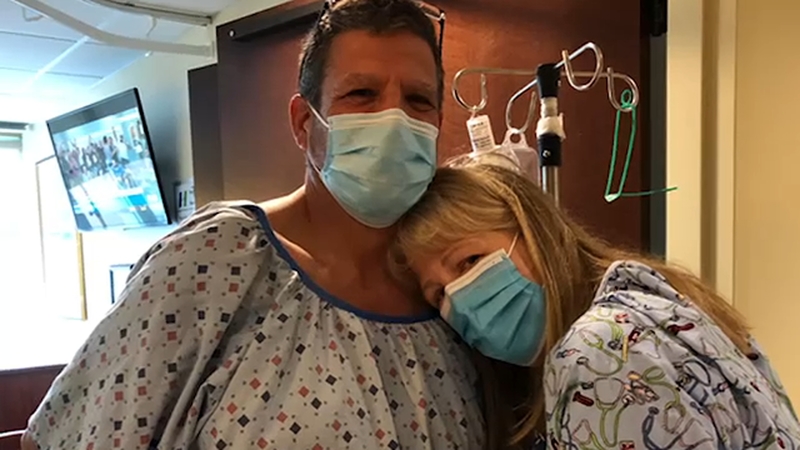 Ray Schwerdtfeger and his cousin Anne Marie Douglas are forever linked after Douglas donated her kidney to a most grateful recipient in Schwerdtfeger.

"I went into six weeks of dialysis," Schwerdtfeger said. "In the meantime, I had put it on social media and my cousin responded immediately which was a miracle in itself."

Schwerdtfeger had posted his need for a kidney in January and Douglas seeing it began a family journey together. The last time they had seen each other was 15 years ago.

"I read it," Douglas said. "I continued to scroll through it, and I paused and I went back and just wrote, 'How can I help?'"

But as she was tested at Hackensack University Medical Center in March, doctors found an unexpected growth on her kidney.

"I wouldn't have found the thing if it wasn't for my cousin, so I was going to hold out as long as I could, so there could be a win in this scenario."

Testing proved it was benign and removed, as the kidney was put on this profusion pump prepared for transplant.

"It was on that perfusion pump with cold solution going through the kidney with nutrients and minerals and stuff the kidney needs to keep it alive," said Dr. David Serur, M.D. in division of organ transplant at Hackensack Medical Center.

"There was a lot of excitement, a lot of anxiety, a lot of angst, but it turned out well," Serur said.

Schwerdtfeger said the kidney was almost working immediately, which he says is "a blessing in itself."

Five weeks later, both donor and recipient recovered well and the cousins reconnected through the gift of life.

"Somebody was looking out for me and in turn Ray, because I was able to help save his life but he in turn, helped save mine," Douglas said.

Schwerdtfeger is thankful for Douglas that she responded to him so quickly and that it went so well.