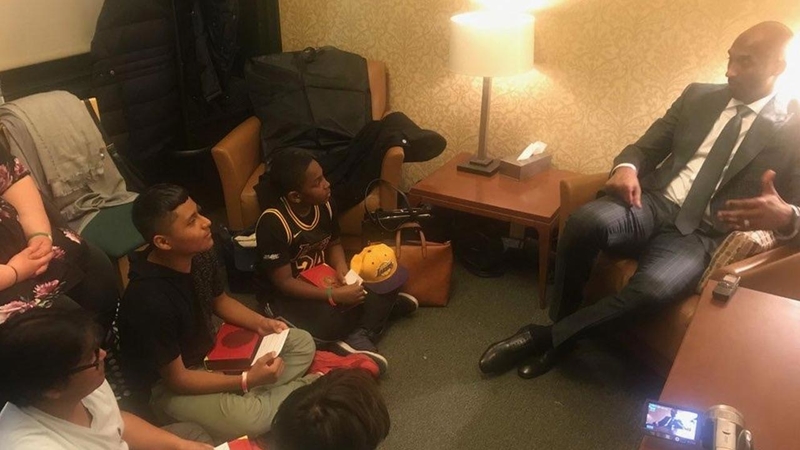 FREEPORT, Long Island (WABC) -- Kobe Bryant's life was tragically cut short, but the dreams he planted on Long Island are alive and well.

Three lucky 7th-graders at the De La Salle School, a Catholic middle school in Freeport providing education to boys from some of the area's most economically challenged families, can attest to that.

Several of them got a rare opportunity last March to interview the NBA star at one of his book signings in New York City.

Student Jose Munguia asked Bryant if he would go back on the court.

"He said no," Munguia said. "Because he found what he loved to do, writing books and inspiring other young people."

Bryant was also asked by the kids who his favorite celebrity was during the interview.

"Oprah Winfrey has it pretty good," Bryant said, according to their article printed in Newsday's Kidsday. "She seems like she's got life pretty figured out."

Bryant told them he enjoyed taking home the gold for the U.S. at the Olympics more than winning championships.

"Because you are playing for your country, and that holds a lot more significance," he said.

Bryant added that his second favorite sport was definitely soccer, and that his number change to 24 meant a lot of things, not the least of which was working hard.

"The 24 hours a day, it really stuck with me," 7th-grader Ian Codio said. "I mean, to just like work hard and push through your dreams."

Another student Humberto Guevara said he wasn't really pushing forward into sports before the Bryant interview.

"I was like getting away from it, but when we went to that interview, it changed my mindset all the way," Guevara said.

When the boys learned of Bryant's tragic death, they were obviously devastated, but their principal said it was his daughter's death that hit home even more because they are all around the same age.

Their biggest question was how Bryant likely handled it with his daughter Gianna.

"He said to her - they thought - that it's gonna be OK," De La Salle principal Jean Marie Becker tearfully explained. "That was their conversation."

For now, the boys are coping through some amazing memories.

"We put our hands up in the air in Manhattan, telling people, 'We shook Kobe's hand,'" Codio said.

Codio and the others were smiling when they explained that they "didn't wash their hands" for the next two days.