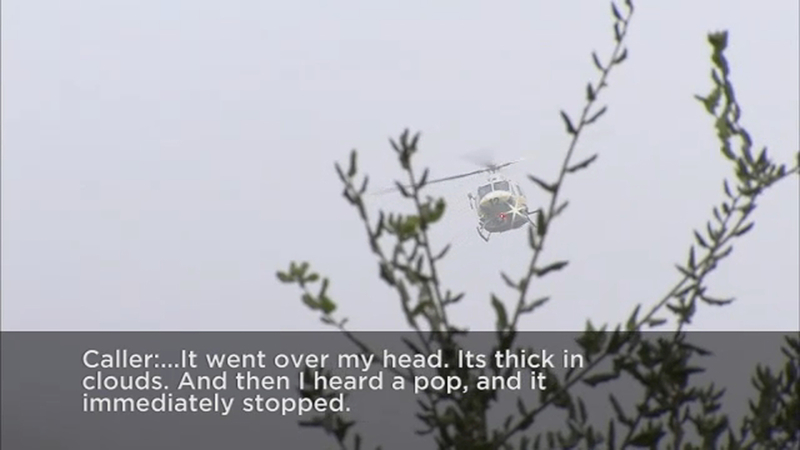 CALABASAS, Calif. -- A little over one week after the death of Kobe Bryant, newly released 911 calls detail the moments immediately following the helicopter crash in Calabasas that killed the NBA superstar and eight other people.

The weather conditions at the time of the crash last Sunday are just one of the factors the National Transportation Safety Board is looking into as part of their investigation into the cause of the incident.

Multiple calls into the Los Angeles County Fire Department dispatch center confirmed just how bad visibility was at the time of the crash.

Through tower communication and satellite images, Eyewitness News took a closer look at the flight path of the helicopter Kobe Bryant, his daughter and seven others were on.

"I'm walking in the trail I could hear the plane, I think it was, in the clouds, but couldn't see it. Then we just heard a 'boom' and a dead sound and then I could see the flames," one caller said.

Another caller told dispatchers that the helicopter crashed into a mountain and was looking at the flames following the impact. Others could only hear the aircraft, but not see it.

A little over one week after the death of Kobe Bryant, newly released 911 calls detail the moments immediately following the helicopter crash in Calabasas that killed 9 people.

"It went over my head. It's thick in clouds. And then I heard a pop and it immediately stopped," another person told authorities. "If this guys doesn't have night vision, I mean, he was, he's completely IFR."

Watch a simulation of the flight path of the Sikorsky S-76B helicopter, which crashed in Calabasas on Sunday morning, killing Kobe Bryant, his 13-year-old daughter Gianna and seven others.