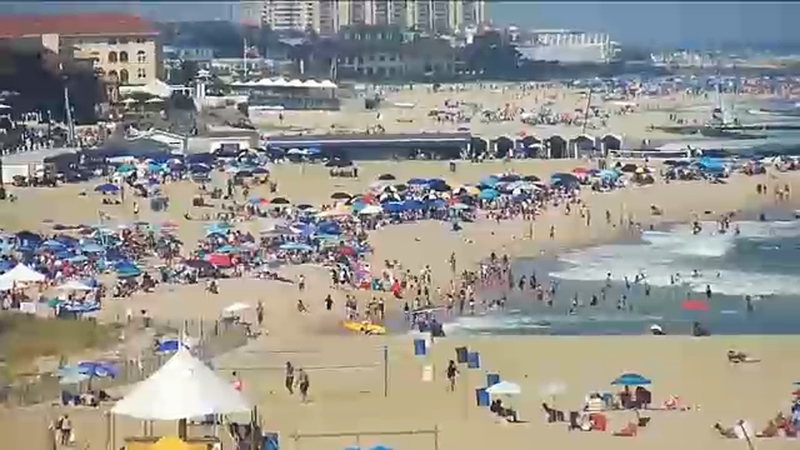 Images could be seen nationwide of packed beaches.

In Florida and Tennessee, there were crowded bars with what appears to be no social distancing, and not everyone wearing masks.

This comes as the number of states seeing an increase in cases tripled in just one week from 10 to 30 states.

Experts say it could take weeks to determine how the holiday weekend will affect the number of cases.

A new forecast over the weekend predicted the United States could more than double its death toll and hit 400,000 deaths by the end of the year.

Biden says he'll take coronavirus vaccine
Joe Biden is willing to take a coronavirus vaccine - as long as scientists say it's OK. Speaking to reporters after a campaign stop in Lancaster, Pennsylvania, Biden said first he'd want to see what the scientists said about any potential vaccine. But he said he would like to see a vaccine tomorrow, even if if would cost him the election by helping President Donald Trump.

Biden also called for "full transparency on the vaccine," warning that Trump's repeated misstatements and falsehoods with respect to the virus are "undermining public confidence."

Schumer was joined by New York City officials in disagreement against the proposed bill, which they say simply acts as a "box-check" for Senator Mitch McConnell and President Donald Trump's handling of the pandemic.

Beaches ready for Labor Day amid fears of potential spike
Some Tri-State residents are trying to squeeze in one last beach day as the coronavirus looms large over the holiday.

It was a picture-perfect day on Labor Day for those who wanted to hit the sand and the waves. Unlike at the beginning of the summer when beaches quickly hit their capacity limits, at Jones Beach on Monday, it wasn't too crowded for those who were eager to enjoy the holiday.

As Labor Day Weekend kicked off, photos and video posted to social media showed dozens of young people packed tightly together on three rental pontoon boats tied together on Lake Monroe, with a fourth nearby.

Brooklyn bar shut down after nearly 300 people found inside
A bar in Brooklyn was shut down over the weekend when sheriff's deputies found 281 people inside.

The pandemic may have canceled the lively event, but the party still lives on. The celebration of Caribbean culture will take center stage virtually more than 10 hours.

Couple handcuffed, ticketed by police after refusing to wear masks on ferry
A couple was handcuffed and removed from a ferry by police officers after they refused to wear face masks in Brooklyn Saturday.

Police said officers were called to Pier 6 in Brooklyn Bridge Park just after 10 p.m. for a call of disorderly people. The captain of an NYC Ferry told them that a 53-year-old man and a 37-year-old woman refused to leave the ferry when they were told get off for not wearing masks.

NJ Plasma Stockpile
A New Jersey-based company is finding a way to help people suffering from COVID-19 across the country with the largest collection of plasma in one drive. "Streamline Verify" has been holding plasma drives at its corporate office in Lakewood since last month. After seven drives, that plasma will be helping people nationwide.

Bodega workers in New York City say mask law puts their safety in jeopardy
Some bodega workers fear for their lives and want officials to do more to protect them amid violent outbursts from customers who do not want to wear masks in their stores.

A growing number of bodega owners are speaking out after multiple instances of people breaking the law by not wearing face coverings. They say they are putting themselves at risk trying to obey a law that is not their responsibility.

NYU announces suspensions, urges students to avoid parties and bars
It's the first weekend of the semester at NYU and the school says more than 20 students have already been suspended for violating its safety and health rules.

Thousands of Connecticut businesses got critical loans during pandemic
When a large swath of Connecticut was forced to shut down during the early days of the coronavirus pandemic, state officials quickly created an emergency loan program from scratch, hoping to help small businesses - from pizza shops to yoga studios - weather the economic crisis.

Months later, records obtained by The Associated Press through a Freedom of Information Act request show the fledgling Connecticut Recovery Bridge Loan Program ultimately funded 2,123 one-year, no-interest loans, averaging $19,705 a piece. Because of the massive flood of applications, officials decided to cap loan amounts at $37,500 - half of the $75,000 originally promised when the program was launched in March - to help twice the number of businesses.

The change was made after officials had to stop accepting applications the day after the program was announced and decided to double the $25 million investment to $50 million, underwritten by the state's venture capital organization.

The Bergen County Zoo reopened just in time for Labor Day. It has several newly-installed upgrades to enforce social distancing and encourage proper hygiene - including hand sanitizing dispensers and viewing barriers. Visitors must wear masks. Customers also must buy tickets in advance. The zoo opens each day at 10 a.m., but will close from 12:30 p.m. to 2 p.m. for cleaning and then reopen again before closing at 4:30 p.m.

High Line expands
There's new reason to make tracks to the High Line in New York City. The park is now open from Gansevoort Street all the way up to 30th street, which includes the spur at 10th Avenue and 30th. The park reopened to 23rd Street back in July after a four-month shutdown. All traffic must go in the same direction heading north.

New York hits positive milestone
New York reported 30 straight days with an infection rate remaining below 1%. Saturday's positive tests were at 0.85%.
"We know based on experience that an incremental, data-driven reopening is the best way to protect the health and safety of all New Yorkers. As this virus continues to be a national crisis, it's clear that caution is a virtue, not a vice," Governor Cuomo said. "Our infection rate has been below 1 percent for 30 days, and New Yorkers can help us keep that streak going by wearing masks, socially distancing and washing their hands. Our actions today determine the rate of infection tomorrow, so as the Labor Day weekend continues, I urge everyone to be smart so we don't see a spike in the weeks ahead."