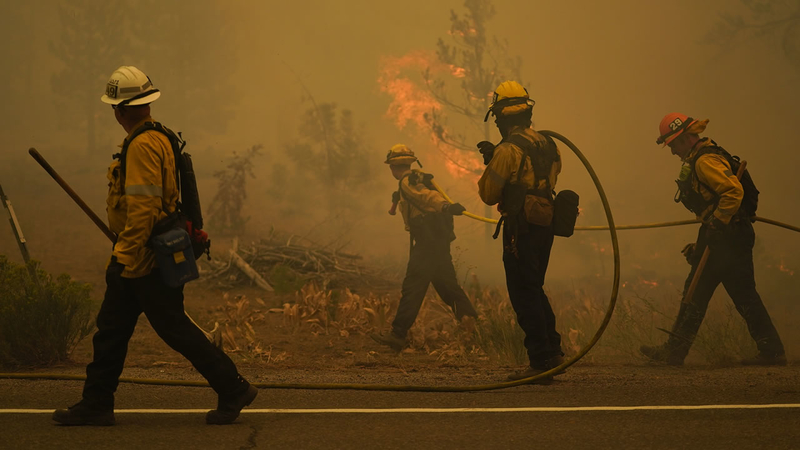 SOUTH LAKE TAHOE, Calif. -- Firefighters reported progress Wednesday in the battle to save communities on the south end of Lake Tahoe from an approaching forest fire after the stiff winds and searing temperatures they had feared failed to materialize in the California-Nevada alpine region.

"We lucked out a little bit yesterday with some of the winds that didn't come up quite as hard as we expected them to," Tim Ernst, an operations section chief, told firefighters in a morning briefing.

An inversion layer, a cap of warm air over cooler air, then developed in the early morning hours "that put a real damper on things, slowed a lot of growth," Ernst said. "So a lot of opportunity to make a lot of progress last night."


For a better experience, click here to view the full map in a new window

The Caldor Fire has been burning toward Lake Tahoe from the southwest along California Highway 50, climbing over a high-elevation Sierra Nevada summit and descending into the Tahoe Basin.

"We were fortunate the fire did not make as strong a push into Tahoe as it did the previous day," Ernst said.

At the northeast tip of the fire, south of the city of South Lake Tahoe, "we've got some great dozer line that protects structures here, so this whole community is looking really good right now," he said.

Despite the positive developments, firefighters were warned that critical weather conditions remained and they would likely face gusty, swirling winds all day.

Thick smoke from the Caldor Fire has enveloped the city of South Lake Tahoe, which is all but deserted during a summer week usually bustling with tourists.

RELATED: Why Caldor Fire is moving so fast, sometimes jumping a mile at a time

On Monday, roughly 22,000 residents jammed the city's main artery for hours after they were ordered to leave as the fire advanced.

South Lake Tahoe city officials said only a handful of residents defied Monday's evacuation order. But nearly everyone worried Tuesday about what the fire would do next.

Tom O'Connell and his wife, Linda, awaited the fate of their home while anchored on their sailboat in Ventura Harbor. The two-bedroom they've owned for 40 years survived the Angora Fire that destroyed about 250 houses in 2007. They didn't know if they'd be lucky again.

"You worry about the things you can have some control over," O'Connell said. "We've no control over this."

Pushed by strong winds, the Caldor Fire has crossed two major highways and swept down slopes into the Tahoe Basin, where firefighters working in steep terrain were protecting remote cabins.

Cal Fire Division Chief Erich Schwab said some homes burned, but it was too early to know how many.

As flames moved toward the Heavenly ski resort on the California-Nevada border, officials turned on the mountain's snow-making machines. Cal Fire Battalion Chief Jed Gaines told San Francisco television station KPIX that spraying the slopes with water was "increasing the humidity level, it's getting everything wet" so that if the fire starts climbing "it's able to slow it down."

But on Tuesday, only a few dozen tourists remained on the casino floor of the Montbleu Resort, Casino and Spa. The state board that controls gaming said that casino regulators were monitoring operations at the four largest gambling properties in the city.

Hotels are housing evacuees, fire crews and other emergency personnel. In all, Harrah's, Harveys Lake Tahoe Casino, the Hard Rock and Montbleu Resort have more than 2,200 hotel rooms.

Nevada Gov. Steve Sisolak urged residents to be prepared, saying there was no timeline for when evacuations might be ordered. At a news conference in Carson City, he noted that ash was falling on him even though the fire was about 20 miles (32 kilometers) away.

"I'm standing here and I'm getting all ash particulates on my jacket, even," the governor said. "This is serious, folks."

Hours later, residents in parts of Douglas County under an evacuation warning were ordered to leave, although casinos were excluded.

At the Douglas County Community & Senior Center in Gardnerville, people had their temperature checked before entering a gymnasium of cots set up by the Red Cross. Outside, evacuees who had stayed in tents sorted through ramen noodles and plastic bags of clothes and keepsakes.

South Lake Tahoe resident Lorie Major was at the grocery store when she got the alert on her phone.

She put on headphones, turned on the Grateful Dead's "Fire on the Mountain" and walked home to an empty apartment complex already vacated by neighbors. She and her mini Australian shepherd, Koda, took a 20-mile (32-kilometer) taxi ride from her South Lake Tahoe apartment to a hotel in Minden, Nevada.

A firefighter injured while battling the Caldor Fire last weekend was expected to be hospitalized for a month after undergoing skin grafting surgery. Richard Gerety III of Patterson, California suffered third-degree burns over 20% of his body, the Modesto Bee reported. Despite the very active fire year, there have not been many injuries or deaths among firefighters or residents.

More than 15,000 firefighters were battling dozens of California blazes, with help from out of state crews. Climate change has made the West much warmer and drier in the past 30 years and will continue to make weather more extreme and wildfires more frequent and destructive, scientists say.

The threat of fire is so widespread that the U.S. Forest Service announced Monday that all national forests in California would be closed until Sept. 17.

Crews are battling the Dixie, the second-largest wildfire in state history at 1,281 square miles (3,317 square kilometers). The weeks-old fire was burning about 65 miles (105 kilometers) north of the Lake Tahoe-area blaze and prompting new evacuation orders and warnings this week.

The Caldor Fire has scorched nearly 312 square miles (808 square kilometers) since breaking out Aug. 14. It was 18% contained.

More than 600 structures have been destroyed, and at least 33,000 more were threatened.

At the evacuation center in Gardnerville, Joe Gillespie said he, his girlfriend and her son left their home in Meyers south of South Lake Tahoe on Sunday, bringing clothes, picture frames and collectibles like Hot Wheels toys from the 1960s that Gillespie's mother gave him.

Gillespie, a mechanic at Sierra-at-Tahoe Resort, said that unlike the northern shore of Lake Tahoe, which is dotted with mansions and second homes, the area currently under threat houses blue-collar workers who make their living at the casinos and ski resorts that make the area so popular.

The Sierra-at-Tahoe Resort is beloved for its unpretentious and comparatively affordable winter prices. It turns 75 this year, he said.

"It sounds like we won't be opening because of the fire," he said.