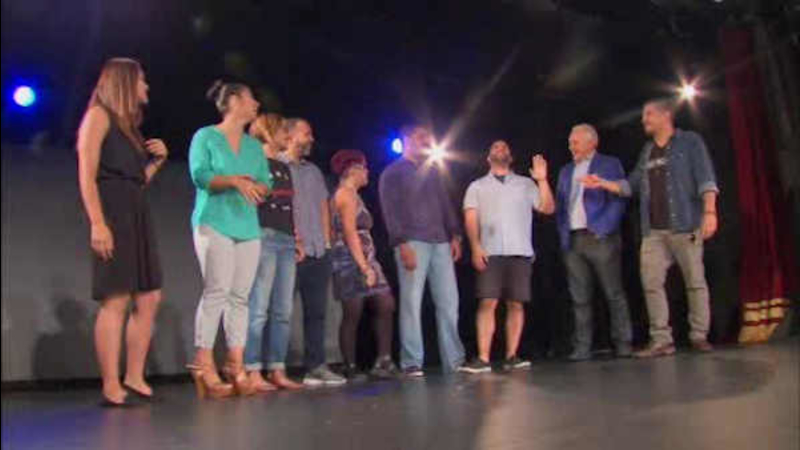 EAST HARLEM (WABC) -- One of the marquee events of Hispanic Heritage Month is the Official Latino Short Film Festival that will be held in East Harlem, featuring films written, directed and produced by Latino filmmakers from all over the United States.

"There was not a single Latino in the movie except for the janitor. It's 2016, we're in the movie theaters and this is the image we saw," said film festival founder Danny Hastings.

And because of that frustration, Hastings has launched the Official Latino Short Film Festival.

Now in its second year, the festival has more than doubled the number of featured films, 86, that will be screened September 16th and 17th at the Poet's Den Theater in East Harlem, a showcase of Latino talent.

The films range between 5 and 25 minutes and span every genre: drama, comedy, horror, sci-fi. Some will be screened in blocks, including one called "Las Jefas", showcasing Latina filmmakers.

"I want to make meaningful films and I want to open my own doors because no one is going to do it for me," said filmmaker Alba Garcia-Rivas.

Garcia-Rivas's medium is stop motion animation. "Time/Space Reflections" is an emotional story about a scientist trying to time travel in order to reunite with her deceased twin.

Laura Aguinaga's film is titled "Short Steps", a story of overcoming one's past, inspired by a dream after her grandmother's death. It is the Queens native's directorial debut.

"So that future generations, little girls of any nationality can say, I want to do that, I want to be that," said Aguinaga.

Inspiration, entertainment..that's what all involved hope the festival will provide, as well as create opportunities more meaningful than those stereotypical Hollywood roles.

"Not only do we have a good time screening the films, we get to network," said filmmaker Michael Diaz. "A lot of collaborations come out of these festivals which is why I'm so appreciative Danny is doing what he's doing."

"You're going to see Latinos playing all sorts of characters for anything you can imagine, so I'm super happy," said Hastings.

And filled with Latino pride.