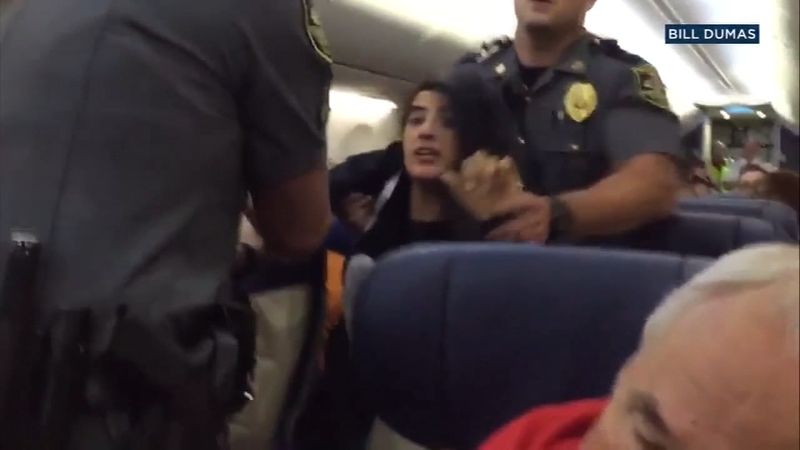 BALTIMORE -- A bystander's dramatic video shows officers dragging a woman off of an L.A.-bound Southwest Airlines flight after a dispute about two dogs on the plane.

The woman claimed she had a life-threatening allergy that prevented her from being near the dogs, one of which was an emotional-support dog. The other animal was a passenger's pet.

The incident began calmly but apparently escalated after the woman was told she would have to exit the plane, which was awaiting takeoff from Baltimore.

"I'm walking! I'm walking!" she is heard yelling in the video, recorded by fellow passenger Bill Dumas. A man then responds: "Then walk!"

Dumas said the woman had requested an allergy shot. When she was informed that she would have to deplane in order for medical staff to administer the shot, she allegedly became upset.

As she was being forcibly removed by officers, she was heard saying she could not miss the flight because her father was having surgery in Los Angeles on Wednesday morning.

"I said, 'Just gently walk off the plane and you're not going to get hurt,'" Dumas recalled in an interview. "She calmed down, it seemed like for a minute, and then she just got obstinate and pushed back against the police officers. She was fighting them very hard.

"They were very careful not to use excessive force," he added.

Southwest Airlines issued a statement after the incident.

"Our policy states that a Customer (without a medical certificate) may be denied boarding if they report a life-threatening allergic reaction and cannot travel safely with an animal onboard," the airline said.

"Our Flight Crew made repeated attempts to explain the situation to the Customer," the statement continued, "however, she refused to deplane and law enforcement became involved."