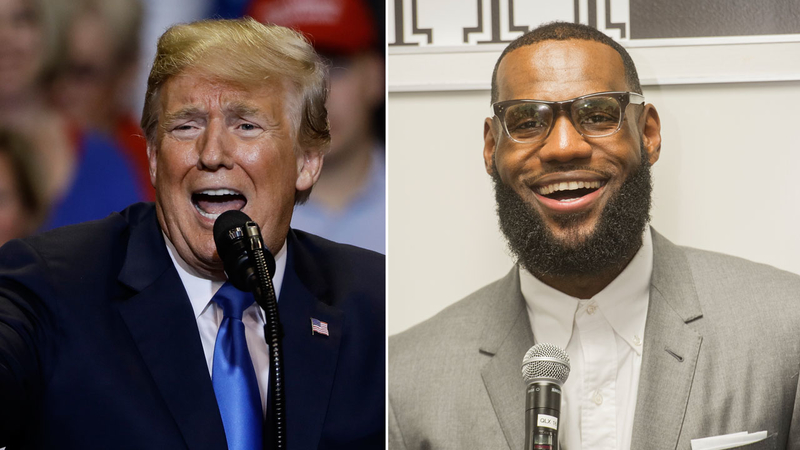 In the tweet, Trump insults Lemon's and James' intelligence and ends it by saying, "I like Mike!"

Lebron James was just interviewed by the dumbest man on television, Don Lemon. He made Lebron look smart, which isn’t easy to do. I like Mike!

Part of James' interview with Lemon was about the new school he opened up in Cleveland to help at-risk youth.

On Monday, James was in his hometown of Akron, Ohio, to welcome children to his I Promise School, which was built as part of a partnership with the LeBron James Family Foundation and Akron City Schools.

The school opened with a group of third- and fourth-graders, but will expand to serve first through eighth grades by 2022.

In addition to talking about the school, James talked about how Trump is using athletics and athletes to divide the country.

"When you're a part of sports...it just brings so much comraderie and so much fun," he said. "We are in a position right now in America, more importantly, where this whole - this race thing - is taking over. One, because I believe our president is trying to divide us."

James also mentioned Colin Kaepernick, who was targeted by Trump for his protests over racial injustice by kneeling during the anthem.

But one major comment that may have sparked Trump's outburst was James' response when Lemon asked if he'd ever want to speak to the president.

Lemon nor James has responded to Trump's tweet. But reactions from other people on Twitter were swift and harsh.

Ben Simmons said James is "a smart dude (and one of the most thoughtful athletes we have)...You're a constant embarrassment." He also mentioned how the tweet appeared racist.

You. Seriously. Just. Made. Me. Nauseous.
Lebron has had one wife, zero scandals, and just opened a school he built for inner city kids.
I’ll take dumb over whatever this tweet defines you as any day. 🤢

In 2013, Trump tweeted that he thought James was a "great player and a great guy," and sent another congratulating the NBA star on winning at the ESPYS.

Congratulations to @KingJames on winning Athlete of the Year in last night’s @ESPYS. LeBron is also a great guy!

"@IcyJordan: @realDonaldTrump do you like LeBron as a player and person? @KingJames" LeBron is a great player and a great guy!