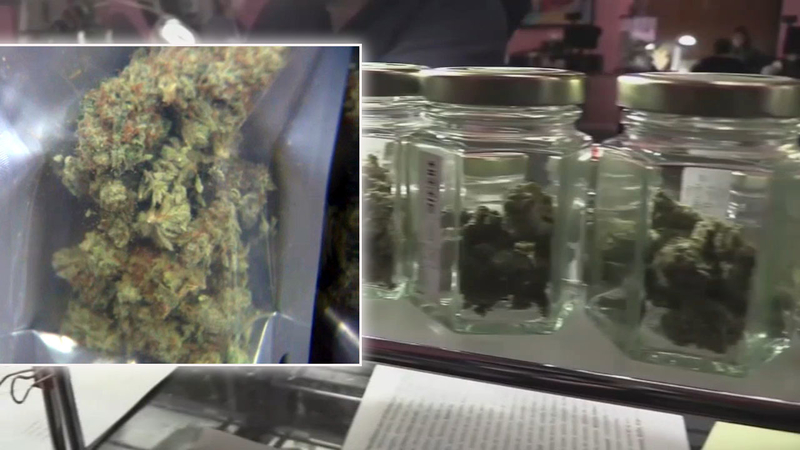 NEW YORK (WABC) -- New York would legalize possession of small amounts of marijuana, launch programs to help communities that bore the brunt of the national and state drug war and eventually allow marijuana sales to people over the age of 21 under a sweeping bill that lawmakers passed Tuesday.

The bill now goes to Gov. Andrew Cuomo, who has ten days to approve or veto once it lands on his desk - otherwise, the bill becomes law. He has said he will sign it.

The governor released a statement Tuesday night just after the passing of the bill.

"New York has a storied history of being the progressive capital of the nation, and this important legislation will once again carry on that legacy. I look forward to signing this legislation into law," Cuomo said.

Criminal justice reform groups and advocates for minority communities hard-hit by the decades-long War on Drugs have hailed the state's bill as particularly sweeping: New York would set a target of ensuring 50% of marijuana licenses go to underrepresented communities, and join a handful of states to automatically expunge past marijuana-related convictions.

"We have literally destroyed the lives of multiple thousands of people," Assembly Majority Leader Crystal Peoples-Stokes said. "That's what's good about this legislation.... We're going to turn around the lives of some of those people and help them to be able to take care of themselves, their families and their communities."

"I'm driving this because I want people to be free from incarceration for a drug that people in their communities use every day," she said.

Just in New York City alone, legalizing marijuana could rake in tens of millions for the city budget because it's going to be taxed.

The legislation allows for possession of up to three ounces and allows people to grow as many as six plants at home.

For products sold at dispensaries, there is a hefty 13% sales tax.

However, district attorneys and police say the bill doesn't do enough to address the issue of driving while impaired.

There currently is not a roadside test to detect marijuana.

The New York State PTA is also against legalization.

"Absolute travesty. All research submitted shows it will be harmful to children, makes the roads less safe," said Kyle Belopkopitsky, Executive Director, New York State PTA. "And I have absolutely no idea what the legislature is thinking in thinking they want to advance this right now."

Mayor Bill de Blasio says those concerns are valid, but he still supports it.

"Too much of this is happening without it being out in the open," he said. "This will force a different kind of conversation, and I hope to normalize the discussion, rather than being something where, you know, young people just sneak away and do what they do."

The legislation would take effect immediately if passed, though sales wouldn't start until New York sets up rules and a proposed cannabis board. Assembly Majority Leader Crystal Peoples-Stokes estimated Friday it could take 18 months to two years for sales to start.

Lawmakers in New York have announced a deal on a bill to legalize, tax and regulate recreational marijuana in New York State.

New York would provide loans, grants, and incubator programs to encourage participation in the cannabis industry by people from minority communities, as well as small farmers, women, and disabled veterans.

Proponents have said the move could create thousands of jobs and begin to address the racial injustice of a decades-long drug war that disproportionately targeted minority and poor communities.

At least 14 other states already allow residents to buy marijuana for recreational and not just medical use. Cuomo has pointed to the growing acceptance of legalization in the Northeast, including in Massachusetts, Maine, and most recently, New Jersey.

New York officials plan to launch an education and prevention campaign aimed at reducing the risk of cannabis among school-aged children, and schools could get grants for anti-vaping and drug prevention and awareness programs.

And the state will also launch a study due by Dec. 31, 2022, that examines the extent that cannabis impairs driving, and whether it depends on factors like time and metabolism.

The bill also allows cities, towns, and villages to opt-out of allowing adult-use cannabis retail dispensaries or on-site consumption licenses by passing a local law by Dec. 31, 2021, or nine months after the effective date of the legislation. They cannot opt-out of legalization.