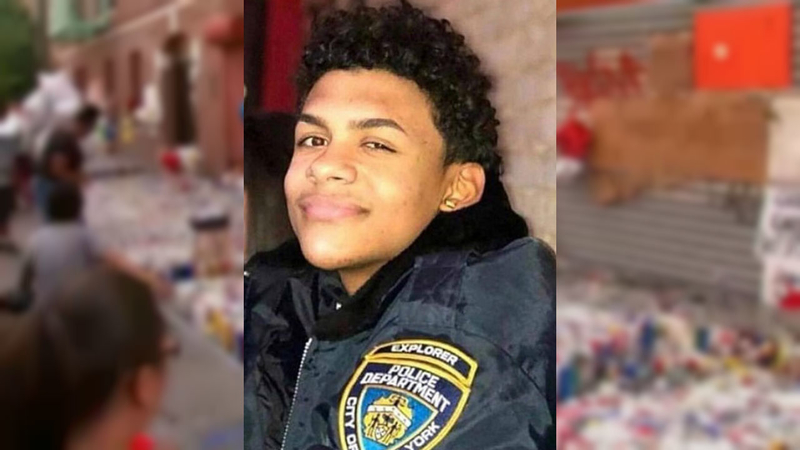 NEW YORK (WABC) -- One day after opening statements in the trial of the first five of 14 men arrested in the death of Lesandro "Junior" Guzman-Feliz in the Bronx, prosecutors played social media video of the 15-year-old being brutally stabbed to death.

The disturbing video was shown in the presence of Junior's mother who sobbed and turned away at times as it was being played. She left the courtroom in tears.

"Was so frustrating, haven't digested it yet," Leandra Feliz said. "I'm still too kind of out of mind....I had to close my eyes, look away, it was torture."

Guzman-Feliz was dragged out of a bodega on East 183rd Street and Bathgate Avenue -- the intersection that now bears his name -- last June and murdered with a machete in what is believed to be a tragic case of mistaken identity.

His murder outraged the community and the nation, put a spotlight on gang violence, and led to the #JusticeForJunior slogan.

Now, Antonio Rodriguez Hernandez Santiago, Jonaiki Martinez Estrella, Jose Muniz and Manuel Rivera and Elvin Garcia are on trial, accused of stabbing Guzman-Feliz. They are all charged with first- and second-degree murder, manslaughter, conspiracy, gang assault and criminal possession of a weapon.

The first witness to take the stand was a friend who tried to help dress Junior's wounds after he collapsed in front of the hospital. She said his last word was "water," as he held his neck.

The jury is comprised of 11 women and one man.

Prosecutors laid out their blueprint in opening statements, describing each of the defendants as violent gang members carrying out a premeditated murder -- on the wrong person.

But defense attorneys argued that only one of those wounds was fatal, and that the other four did not intend to kill.

Junior's family is not buying that claim.

"Why would they need those weapons if they're not trying to kill someone?" sister-in-law Ione Guierrez said. "I need somebody to explain that to me."

Junior's father was escorted out by police Monday after family supporters say the defendants turned towards a courtroom packed with family and friends and smiled.

"These guys are sitting there, just looking at us, just literally laughing," supporter Ilene Mariez said.

"The family got really really upset, and the father, towards the end, he was so upset he was using profanity," Mariez said. "So they pulled him from the courtroom."

The defense is also arguing that some of the suspects were dragged into this gang with nowhere else to turn and faced brutal punishment from gang leaders if they didn't carry out the attack.

All of the suspects face life in prison if convicted.

The nine other suspects, who are accused of taking part in the assault but not of stabbing Guzman-Feliz, will be tried at another time. They have a pretrial hearing set for June 17.