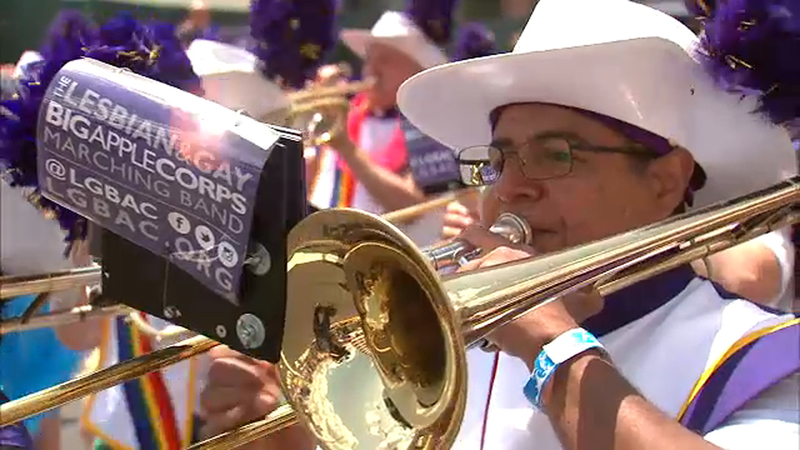 NEW YORK CITY (WABC) -- As Pride Month festivities ramp up into high gear, an LGBTQ marching band is celebrating 40 years of playing loud, out, and proud.

The Lesbian and Gay Big Apple Corps will once again be participating in the annual Pride March.

"Joining the band was part of my journey to be where I am right now," founding member Joe Avena said. "Without this band, I would have come out eventually, but my life would have been very different."

It was the music that brought these friends together 40 years ago, and they became founding members of what -- back then -- they called the Gay Community Marching Band.

"I met Joe, who became my best friend over the last 39 years, 40 years, so I get all choked up about it," founding member Eric Rouda said. "It's probably become one of the most important things. No matter what kind of miserable day I'm having, I show up at band, and it goes away. And that's the gift that music has, and that's the gift that family has."

The Lesbian and Gay Big Apple Corp was founded in 1979 by Jon Simms, who founded a similar band in 1978 in San Francisco.

"I wasn't out to my parents, but there was just something that drew me to the music," founding member Jacqui Aquilino-Jirak said. "Here, they can see our humanity. Here, they can see we are...we're them. We're part of them through our music."

And in 1980, they made their debut in the annual New York City Pride March.

It was more of a protest than a parade, born out of the Stonewall uprising. But founding manager Jim Roman says it was that way, until they showed up.
m
"The reporters are there, the police are there," he said. "Everybody takes a look, and they all see that this year, the gay event is a parade! Being led by a marching band! And that's the moment that, in America, there is a gay pride parade."

But it was not always a celebration.

"We went through the AIDS crisis, where we lost half the band," founding member Marsha Stone said. "We lost family members."

And it's that struggle that Stone wants younger generations to remember.

But today, nobody's stopping them as they prepare to march in front of millions -- 150 volunteer members strong -- this time for WorldPride.

"They are going to see something they have never seen before," founding member Joe Avena said. "We are huge, formidable. We rehearse well, and we sound really good."

CLICK HERE for more on The Lesbian and Gay Big Apple Corps.