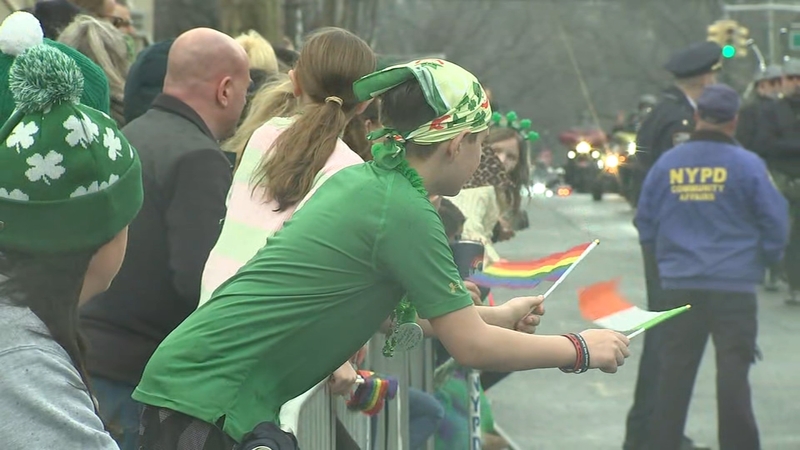 STATEN ISLAND (WABC) -- State Island's St. Patrick's Day parade stepped off this Sunday, but some members of the community were not allowed to participate.

LGBTQ groups came together before the parade to denounce the decision to exclude queer people from this year's parade with the Rainbow Run.

Around 100 members of the LGBTQ community ran down Forest Avenue decked out in rainbow attire passing out pride and Irish flags.

The Staten Island St. Patrick's Day parade is the only one in the city that doesn't allow LGBTQ groups to march.

K.C. Hankins is a high school teacher and helped organize the Rainbow Run.

They think it's important that queer Staten Islanders see they're supported and have a place in the community.

"I remember what it felt like to not be included in my community and I never want young people to feel that way, Hankins said. "So when young people are playing in a band in this parade they are told that their queer identity doesn't matter and their queer identity is not welcome here. So it's very important for us to show visibility and to show the community that they are welcome here and they have the support."

Carrol Bullock is the Executive Director of the Pride Center of Staten Island and says the center's application to march in the parade has been denied for several years.

"Every year we attempt to march in the St. Patrick's Day parade under our banner the pride center of Staten Island and every year we are denied by the parade committee," Bullock said. "And we are told that the reason is that we violate the Catholic religion and apparently I guess you can't be Irish, Catholic, and in the LGBTQ community which is insanity."

Members of the LGBTQ community are calling for the city to reconsider spending its budget on the event since it discriminates against queer New Yorkers.

City Comptroller Brad Lander said his agency would be looking into how much is spent on the event and that the permit granting agencies should consider where public funds are being spent before allocating resources.

"We shouldn't be spending scares city dollars providing the police and public accommodations," Lander said. "We've got a strong human rights law that says you can't discriminate and there's just no doubt this parade is discriminating and it's got to stop."

Mike Marza reports that both mandates will end on Monday, March 7.