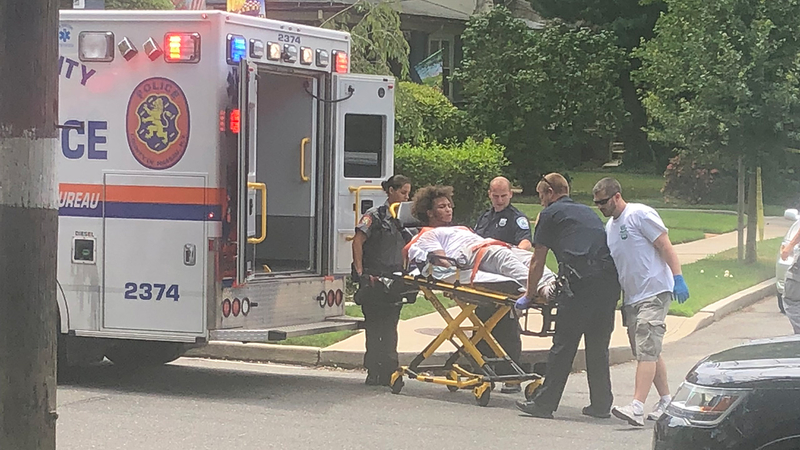 LYNBROOK, Long Island (WABC) -- A drug-related police pursuit on Long Island ended with a crash on someone's front lawn and a suspect in custody Thursday afternoon.

The U.S. Marshals New York/New Jersey Regional Fugitive Task Force was involved in the incident, which ended at Brower Place and Earle Avenue in Lynbrook, with the suspect's vehicle up on a resident's lawn.

Authorities say the task force was attempting to arrest 27-year-old Cory Cornish, of Coram, on a Suffolk County warrant for assault and a New York state parole warrant.

Cornish allegedly attempted to flee in his car but crashed a block later.

He was taken into custody and transported to a medical facility for evaluation.

Members of the task force were exposed to illegal drugs and were briefly hospitalized before being medically cleared and released.

Neighbors described the commotion, saying there were screeching noises and guns drawn. Thankfully, no one in the neighborhood was hurt.

"I saw all these guns, and I had no idea what was going on," resident Patricia Meehan said. "So I ran back inside and shut the door, and we watched and we came out and heard that it was a drug bust. We watched him get arrested and taken away. It is scary that this would happen in our neighborhood. I was very thankful that it wasn't one of the children. Thank God nobody was outside, because we have a lot of children on this block who ride up and down on their bicycles. It was a miracle nobody else was out there."

In the moments that followed, authorities could be seen taking away bags of evidence from the suspect's vehicle.