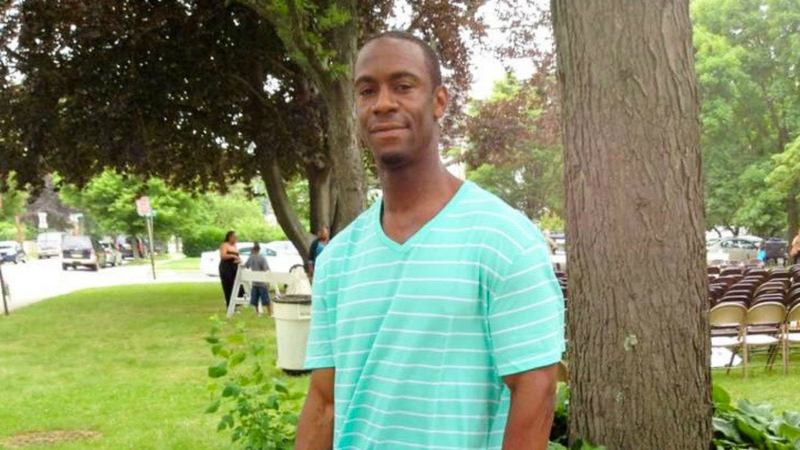 LI officials call for investigation into arrest caught on video

FREEPORT, Long Island (WABC) -- Officials in Nassau County are calling for an investigation into a violent arrest caught on camera.

Akbar Rogers, 44, was arrested by Freeport police and was wanted for harassment and driving without a license after an incident in October.

He also allegedly fled from police in a high-speed chase in November. After another chase on Tuesday, video shows officers trying to arrest him outside his home.

In the video, officers drag Rogers over a backyard fence and then try to restrain him and subdue him. In the process, Rogers is punched repeatedly in his head and body. He screams out several times, and the officers are heard ordering him to stop resisting.

While the police are given broad latitude to use physical force to a suspect who is resisting arrest, it is not clear from the video the extent to which he is resisting.

Rogers admitted to Eyewitness News that he ran from the police, but says he surrendered to the officers before he was beaten and says the beating continued while he was in handcuffs.
EMBED More News Videos

Jim Dolan has details on the controversial arrest of a man on Long Island.

Rogers said he did nothing wrong. "I'm the victim here," he said.

He said he was tased several times while in handcuffs but the video does not definitively show that. "They wrestled me down, cuffed me and put the cuffs on me and they kept tasing me, saying 'don't resist, don't resist', which I wasn't," said Rogers. "I couldn't do nothing more, the ground was full of officers on me and then I'm getting pummeled in my face, in my back. They tased me in my genitals, they was doing all kinds of dirty stuff to me."

Rogers' son, Rahquell Rogers, says his father was the victim of police brutality.

"The only thing they didn't do was shoot my dad," he said. "My dad wasn't resisting...how could a person resist arrest if he is laying flat on his stomach and he's in a submission form."

The Nassau County executive has ordered an investigation -- because a video does not always tell the whole story.

"What I do ask is that we all remain calm and patient as this process happens," Nassau County Executive Laura Curran said. "With videos like this, it's a snapshot, we don't know what happened before, we don't know what happened after, and this is something that the review will uncover for us."
One of the officers in the video is believed to be the son of the mayor of Freeport.

"The Freeport Police Benevolent Association stands behind our officers and the safety and security of the residents we serve. I am confident that when the judicial process is complete and all facts are presented, it will be confirmed that our officers did their jobs in accordance with the law."

"I thought I was gonna die, I said y'all are killing me," said Akbar Rogers. "As you hear in the tape, I said you're killing me, I can't breathe. They told me I'm resisting. My hand they dislocated, I got a big knot, they did me so wrong."

A protest rally against the police is planned for Friday.