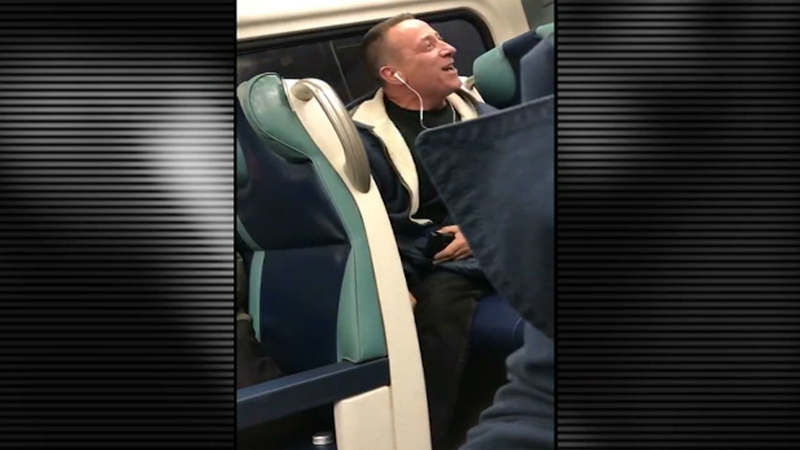 NEW YORK (WABC) -- The man caught on camera delivering a hate-filled rant on the Long Island Rail Road appeared in court Thursday, taking a plea deal that will keep him out of jail.

The incident happened around 10 p.m. on April 19 on the LIRR train from Jamaica to Valley Stream. Passengers say Ruggiero spewed hate for a full 10 minutes, hurling a combo of sexist and racist slurs directed at a fellow rider who was an African-American woman.

"He made me feel disgusting," Soraya Orelien said in an exclusive interview with Eyewitness News. "He made me feel less than what I am. And I'm not the only one who has experienced this."

Ruggiero accepted a plea bargain that will require him to undergo three months of bias sensitivity training. The original charged carried the potential for a year behind bars, but Ruggiero pleaded guilty to one count of aggravated harassment and one count of disorderly conduct.

Prosecutors said in court that Orelien had signed off on the plea deal.

Ruggiero made no comment as he left the courtroom and declined to apologize to the victim, instead directing questions to his lawyer.

"So people say things that one could take as being racist or baised, that doesn't make them a racist," attorney Joseph Donatelli said. "Now, this was definitely a racist comment, but I know he works in a union, I know he works with numerous minorities, and I know he's never had an assault charge. I know he's never assaulted anyone. So perhaps that day, he was just angry. And where he comes from, the thing that he said is not so uncommon 30 or 40 years ago."

Still, Donatelli insisted there is absolutely no excuse for his client's tirade.