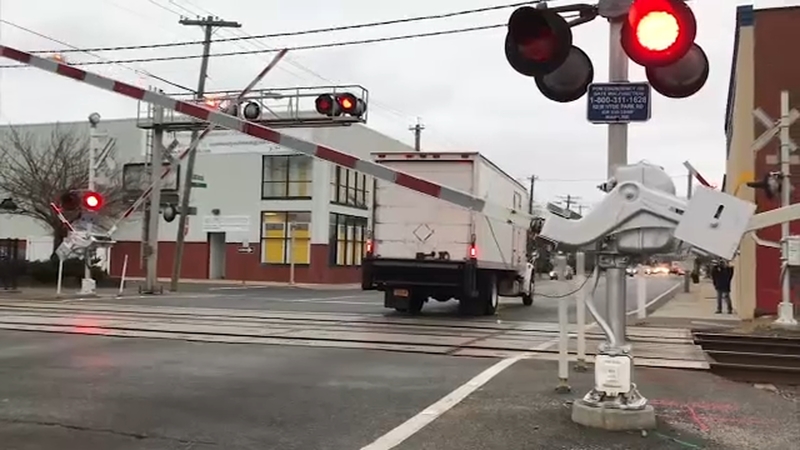 NEW HYDE PARK, Long Island (WABC) -- Officials are working to keep drivers safe by cutting down the number of vehicles that attempt to beat trains on the railroad tracks and crash into the gates.

Gate crashing is when drivers run the lights and literally crash into the gates -- which puts their lives and the lives of train passengers on the line.

One of the busiest railroad crossings on Long Island is where New Hyde park crosses the main line of the Long Island Rail Road.

Bells and flashing lights set off a frenzy as express trains hurtle down the tracks at up to 80 mph.

Motorists are often seen trying to beat the gates and the 800-ton train bearing down on them.

They don't always make it. The LIRR has 296 railroad crossings. Some motorists are struck driving around the gates and others crash right through them.

In November, the number of gate crashings doubled -- averaging four cars a week. Although none were struck by trains, 2018 saw an increase of just over seven percent.

Robert Sinclair of AAA says it may be the latest example of the risks of distracted driving.

"Two seconds is all it takes, Sinclair said. "Just a brief two-second distraction could be enough to take his attention from the road, and not see that the gates are down, and this could be waiting on the other side."

For LIRR President Phil Eng it's a troubling trend and comes after a successful initiative to keep motorists using GPS devices from driving onto the tracks.

Those incidents have been virtually eliminated by the installation of reflective posts and lane striping.

Gate crashing is something else.

"There's a number of reasons behind it, those indicators are things for us to now look at where we need to do some work," Eng said.

Until then, enforcement is being stepped up. Some members of the MTA board want surveillance cameras. And red light cameras could make drivers think twice.

But motorists we spoke with said there's no excuse for crashing the gates.

"They're pretty bright and loud, you can hear them and see them," one driver said. "So they should be able to stop."