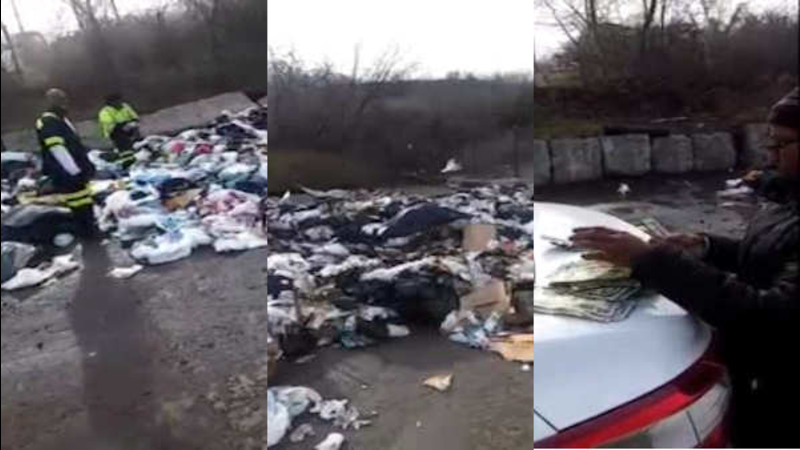 LONG BEACH, Long Island (WABC) -- A woman on Long Island is set for a happier holiday season thanks to a lucky family relationship and the generosity of others.

Her mortgage payment -- thousands of dollars in cash -- accidentally ended up the trash. And to find it, she went to the dump and rummaged through the garbage. Fortunately, she had help from sanitation workers who were happy to a good deed, and somebody videotaped the whole thing and posted it on Facebook.

The four Long Beach sanitation employees helped pull off a true Christmas miracle after one of their mothers rushed a bag of garbage out to the street that she didn't realize contained an envelope with $5,000 inside.

"She comes crying to me on the job that she lost the money," son Krishna Nandalall said.

"We had to give it a shot because his mother was there," Brown said. "So we tried to help out."

They enlisted Mark Compton and Sean Lewis, and the group headed to the Town of Hempstead transfer station, where the garbage was taken.

They were able to isolate the garbage from the Long Beach truck and began searching.

"We are pulling the bags apart hoping to find the money," Compton said. "We were telling the mother, 'Don't worry. We are not going to leave here until we find the money.'"

After searching half an hour, they hit the jackpot.

"Two big bags out, she went in there, she started searching," Nandalall said. "She's like, 'I got the money.'"

His mother counted the money and was able to recover every bill.

"We actually got lucky," Lewis said. "And to see her pick up that big wad that was right under the bag, it was a blessing, a good Christmas gift."

Nandalall's mother was able to pay her mortgage, and she wanted to reward the men.

"I wouldn't take it," Compton said. "He works with us and everything. I said no. just keep it. I was just happy she found the money."