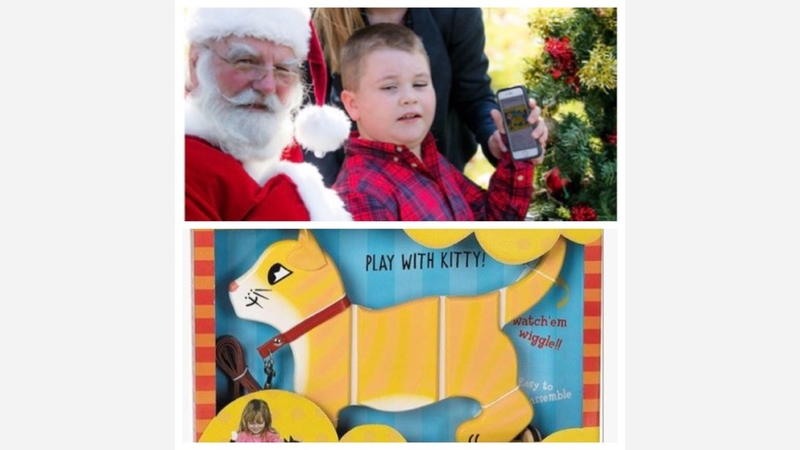 BETHPAGE, Long Island (WABC) -- The big items on most kids' Christmas lists may be a new video game system, tablet or phone. But none of those are on Michael Clyne's list. All he wants is a wooden pull toy.

Michael, 10, has autism and became obsessed with what he calls "Apple Pie Ginger Cat" over the summer. The toy, made by London-based company Apple Pie Toys, is no longer in production.

"At this point the gamble is, are we going to find it in time for Christmas because he really thinks Santa is going to bring this," said Jeanie Shelton-Clyne, Michael's mother.

Shelton-Clyne of Bethpage said Michael is not often able to dictate exactly what he wants. So the entire family was blown away when Michael recently told Santa that he wanted the wooden cat toy for Christmas.

The online community came out in force to help the family find the toy sharing posts on Facebook. Shelton-Clyne said Apple Pie Toys confirmed that it no longer makes the toy but would try to track one down.

"The hope is that someone out there has it in their toy room and is willing to make a deal with us," said Shelton-Clyne.

A company director in California managed to find a brand new one in the box and says it will be on it's way to Bethpage! It is expected to arrive in a few days.
Report a correction or typo
Related topics:
family & parentingbethpagenassau countyautismchristmas giftholidaychristmastoys
Copyright © 2022 WABC-TV. All Rights Reserved.
HOLIDAY
Ja Rule, Ashanti among performers for 'New Year's Rockin' Eve'
What to do if you were exposed to COVID at holiday gathering
Sweet repeat: Brothers regift same hard candy for decades
Santa's house valued at more than $1 million, according to Zillow
TOP STORIES
Mother of Burger King employee killed makes sorrowful plea
Driver arrested after 15-year-old girl killed by school bus in NYC
How much snow fell across the Tri-State
Suspect shot, cop suffers concussion during incident in Yonkers
AccuWeather: Sunshine returns, cold
Woman killed in deadly subway attack was advocate for homeless
Retired Staten Island ferry up for auction after price slash
Show More
Friends, family searching for NJ dad reported missing in New Orleans
Daily COVID-19 cases in New York continue to go down
Crews rescue man on motorcycle, witnesses who fell through ice in NJ
Volunteers pay tribute to MLK through food drive in NJ
Catch first full moon of 2022 Monday night
More TOP STORIES News