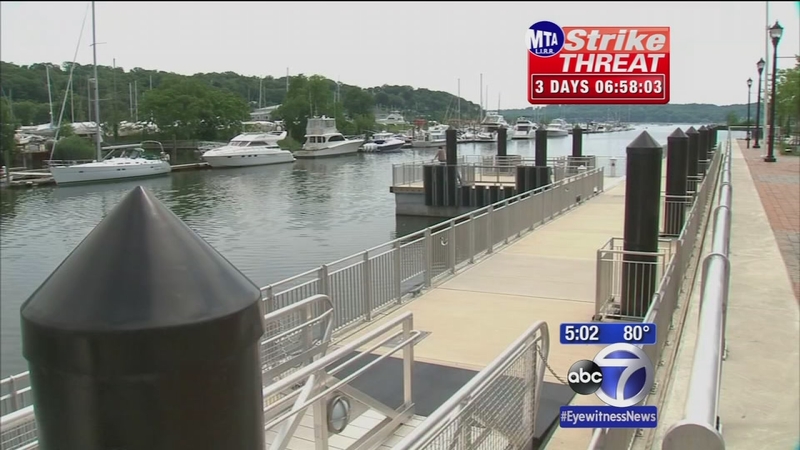 GLEN COVE, N.Y. (WABC) -- All Long Island commuters are scrambling for ways to get into Manhattan if the Long Island Rail Road workers strike - but some residents are perhaps more concerned than others.

LIRR riders from the North Shore have fewer options if there's a strike.

"I have to drive, I suppose," said Dave Algeria, of Huntington Station. "We're looking at putting a carpool together."

The MTA contingency shuttle map shows no pickups on the North Shore, which leaves thousands of riders who use the Port Jefferson branch out of luck.
"We've been left out and this is unacceptable," said state Rep. William Spencer (D).

On Wednesday, local leaders called upon the MTA to take another look at its contingency plan and rework it.

Mark Epstein, a member of the LIRR Commuter Council, called the lack of bus service "absolutely inefficient ... we have expressed that to the MTA."

Relying on the ferry from Glen Cove to East 34th Street could also be problematic. The MTA said originally it would transport 1,000 people three times a day, but Eyewitness News has learned that the plan will only be for 500 people, once in the morning and once in the evening.

The mayor of Glen Cove said the city has gotten little help from the MTA in coordinating the ferry service.

"The city is willing to assist, but we're not willing to take the lead. That's not our job, OK. My first loyalty is to the residents of Glen Cove," said Reginald Spinello.

A MTA spokesperson said it can't comment specifically on requests for more service, and that it has been working for months with state and local leaders to come up with locations. The supervisor of the town of Huntington said the town will be providing buses to the MTA-provided buses.