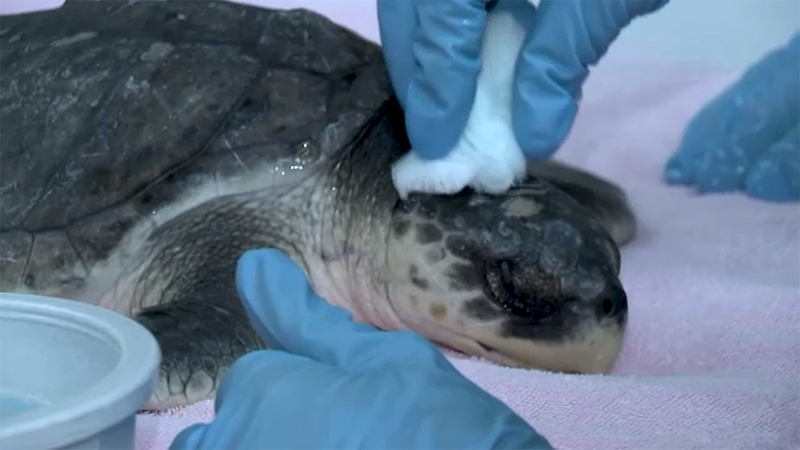 It's hard not to get too attached to the little turtles, especially after saving their lives.

Lenore McGinn and Lorraine Misciagno are volunteers who signed up for the job of patrolling the beaches of Long Island's north and south shores for the New York Marine Rescue Center.

Emergency rescues are crucial when cold, stunned turtles don't migrate in time and are struggling to survive.

"And it's that critical moment of finding those animals on the beach, the minute they hit the beach - that helps with their survival," Rescue Program Director Maxine Montello said.

This is when volunteers become key.

"If we're not out there, they're just gonna die," Misciagno said.

The numbers this year are startling. A record-breaking 85 turtles were rescued in New York state.

That's twice the number last year and more than 50 percent of those rescued this year, is the most critically endangered type, known as Kemp's Ridley.

McGinn and Misciagno say they both feel like they've become professionals already.

The volunteer force has also doubled since last year, which could explain the uptick in the turtles not only surviving - but thriving at the center.

The turtles come here because they enjoy the protective nature of Long Island's geography such as the waters from the Long Island Sound, the Peconic Bay, and the Great South Bay.

The goal is to get them back out here this summer. The problem is when the water temperature dips below 55.

"They become buoyant, they're not able to move in the water because they are cold-blooded species," Montello said.

A little human protection makes all the difference.

McGinn and Misciagno say they both have a love for turtles now.

Did you know that you can call a 24-hour hotline to report a stranded sea turtle??

If you find one, you can move it above the high tide line, cover it with dry seaweed, mark the area with pieces of debris, and call the NY Marine Rescue Center. For more info on becoming a volunteer, CLICK HERE.