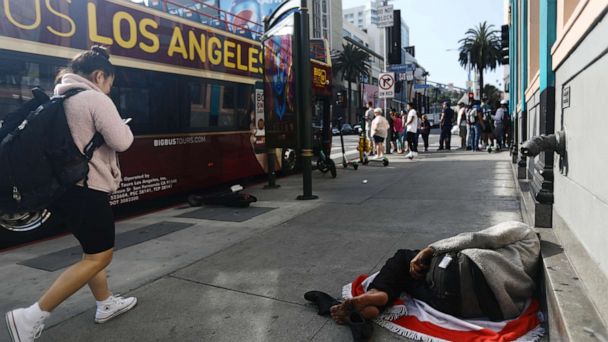 ABCNews
By JULIA JACOBO
Los Angeles Mayor Eric Garcetti is highlighting the plans in motion to tackle the city's homelessness crisis, which he described as "perhaps the most complex and difficult civic challenge" in a generation.

Last week, the Los Angeles Homeless Services Authority announced that the number of homeless people in Los Angeles County jumped 12% over the past year to a total of 58,936.

Youth homelessness rose 24%, in part due to improvements in counting the population, and the number of seniors 62 and over rose more than 8%, according to the release.

In an open letter to residents Tuesday, Garcetti wrote that the problem needs to be treated like "the humanitarian emergency that it is."

"That starts with me," he said.

More than 100 projects are in the works to help alleviate the problem, Garcetti said, adding that the "first job" is to build housing because "Angelenos are becoming homeless faster than we can provide housing for them."

The homelessness budget has increased to more than $460 million for housing and services, 25 times what it was four years ago, and the city is ahead of its goal to build 100,000 new units of housing, according to the letter.

"As your mayor, I take full responsibility for our response to this crisis," Garcetti said. "And like everyone who has seen families in tents or spoken to a homeless veteran in need, I am both heartbroken and impatient."

Garcetti also called upon the private sector "to do more" amid the city's growing economy.

"If you're a business owner with a parking lot that goes unused at night, I'll ask you to open it up to people who live in their vehicles and need a place to park," he wrote. "If you're an executive for one of L.A.'s many successful startup companies, I'll ask you to hire homeless Angelenos and contribute to our cause. I'll ask more landlords to work with rehousing programs, so that families experiencing homelessness can make it out of shelters and into homes."

A December report from a local pest control company hired by the city shows that the homeless population living near the civic center were creating a "harborage for rodents" in the City Hall due to poor sanitary conditions that include leftover food, human waste and hypodermic needles, according to the Los Angeles Times. The company recommended that the city clear away the homeless people living nearby, the Times reported.

Statewide data shows that California has 129,972 homeless residents, the second-largest in state history after the Great San Francisco Earthquake struck in 1906, which resulted in more than 200,000 people losing their homes overnight, according to the letter.