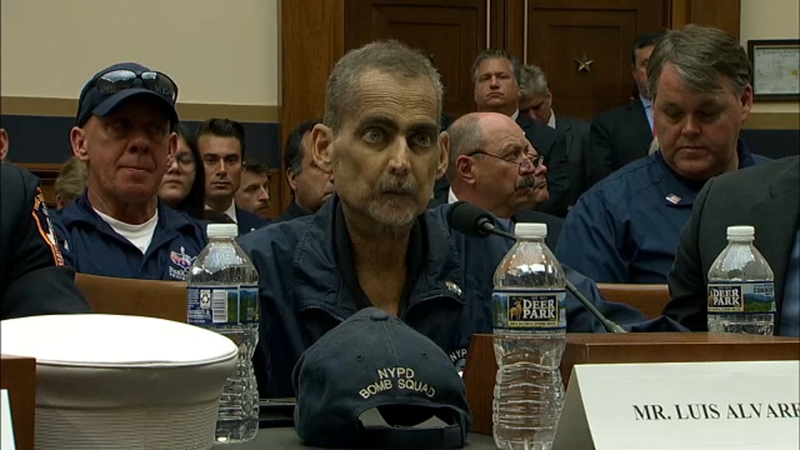 NEW YORK -- Det. Luis Alvarez, the retired NYPD officer with 9/11-related cancer who testified before Congress regarding funding for the 9/11 Victim Compensation Fund, has died. He was 53.

He exemplified the NYPD motto, “Fidelis Ad Mortem” or “Faithful Unto Death.” Detective Lou Alvarez has lost his battle with 9/11-related cancer. An inspiration, a warrior, a friend—we will carry his sword. https://t.co/utRphj7owx

In the aftermath of the World Trade Center attack, Alvarez was charged with cleaning the area and picking through waste material. He was later diagnosed with cancer, and in June he underwent his 69th round of chemotherapy.

"I will not stand by and watch as my friends with cancer from 9/11 like me are valued less than anyone else because of when they get sick, they die," he told Congress.

Afterward, the House Judiciary Committee unanimously passed a bill to extend the program's funding. The measure now heads to the full House, and if it becomes law, funding will be available until 2090.

Alvarez entered hospice care last week, where he continued to publicly advocate for the support of 9/11 first responders.

NYPD Detective Lou Alvarez died at peace knowing his life made a difference to others and will save lives in the future.

He was a great man. My prayers go to his family, the NYPD, and all who loved him. https://t.co/anHtQyzt4A

Congress must honor the memory of Lou Alvarez and pass the Victims Compensation Fund without delay. Cannot allow Lou Alvarez to have died in vain. Det. Luis Alvarez R.I.P. pic.twitter.com/QFAopxFUHx