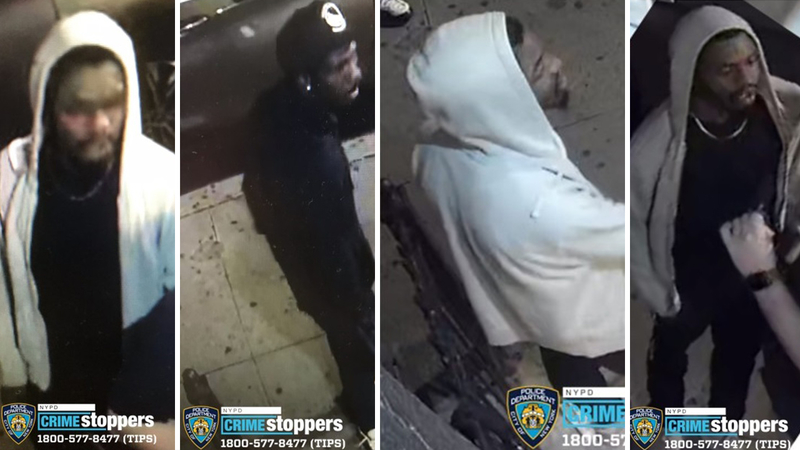 Search for men in string of violent robberies in Manhattan

LOWER EAST SIDE, Manhattan (WABC) -- Police are searching for the men behind a string of violent robberies in Manhattan.

Investigators say they have been involved in as many as seven incidents on the Lower East Side since the end of last month.

The first incident happened on Saturday, August 24th at around 3 a.m., near Ludlow Street and Orchard Street. A 27-year-old man was walking when he was approached by four men. They began to hit him in the head and about his body causing him to lose consciousness. When he regained consciousness, his wallet and jewelry worth $3,000 were missing.

Just one day later, a 28-year-old man was approached just before 3 a.m. in front of a building on Stanton Street. Two men hit him in his head and body causing pain and bruising. They took his wallet containing $200.

Then, on Thursday, August 29th, the four men approached a 25-year-old man on East 3rd Street at 1st Avenue. They hit him in the head and body causing pain and bruising. They took his wallet and jewelry worth $2,400. He was not seriously injured.

A few days later on Friday, September 6th, they attacked a 26-year-old man on Pitt Street at 1:45 a.m. They got away with his wallet.

In the fifth incident, they attacked a 31-year-old man the following day just before 1 a.m. He was walking on Orchard Street. Two men hit him in the head and on his body. They stole his wallet worth approximately $200. He was taken to Bellevue hospital with non-life threatening injuries.

Just an hour and a half later, two of the men attacked a 23-year-old man on Ludlow Street. They got away with the victim's backpack, wallet, and cell phone worth $1,800.

At around the same time, the two men attacked another 23-year-old man, also on Ludlow Street. They took his cash, wallet and cell phone worth $1,200.

The suspects are described as black men between the ages of 20-30. They were seen wearing dark clothing.