Manhunt underway after man slashed on subway in Lower Manhattan 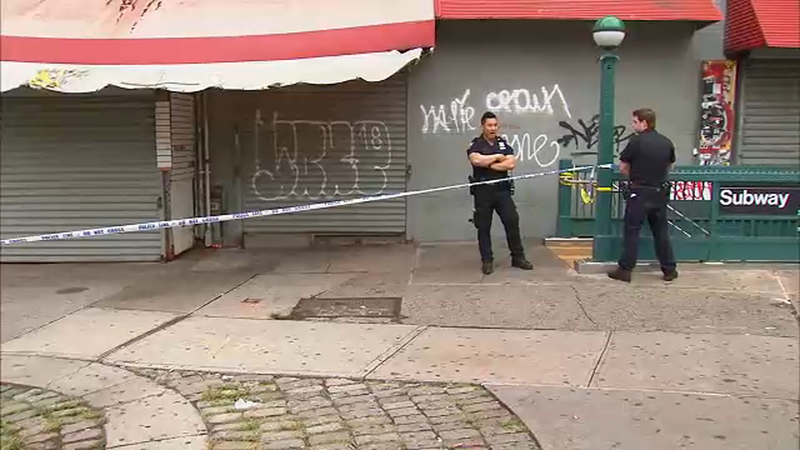 Manhunt for suspect in subway slashing

LOWER MANHATTAN, New York City (WABC) -- A manhunt is underway after a man was slashed in the subway in Lower Manhattan Tuesday.

The incident happened at about 4:45 p.m. near Sixth Avenue and Canal Street at the SoHo-Tribeca border, with the A/C/E Canal Street station the epicenter of the investigation.

After being slashed, the victim chased the suspect for blocks and tried to knock him out with a piece of construction material.

"I walked out the front door and I saw this piece of plywood fly through the air across the street," said eyewitness Brian Karlsson.

The aim was almost spot on, but the roughly 1 x 3 piece of plywood skimmed the 6 foot slashing suspect and didn't make contact.

"These two guys were chasing somebody and it looked like they had thrown the plywood at him to try to get his attention," said Karlsson.

Police say the victim and a friend were walking down to the A/C/E platform at the Canal Street station when they accidentally bumped into the suspect, who was dressed in a trench coat.

"A physical dispute ensued and one male did pull out a small pen knife and slashed the victim to the forehead, he received a small laceration and also a small laceration to the wrist," said Transit Bureau Assistant Chief Vincent Coogan.

"Both the guy that got stabbed and his friend chased the stabber from the Canal Street subway," said Karlsson.

Exclusive surveillance video obtained by Eyewitness News shows the victim and his friend chasing the suspect a few blocks away. Brian Karlsson says even though he was bloody, the victim hurled a huge piece of plywood at the suspect.

"Just had a cut on his neck and he was soaked in blood all over his neck. He seemed OK, it ended up being not too deep of a cut but he got stabbed by a stranger for no reason on the subway," said Karlsson.

The 44-year-old victim will be OK. Police say he was taken to the hospital with non-life-threatening injuries.

Police are looking for a black male wearing a trench coat, blue hoodie and green pants.