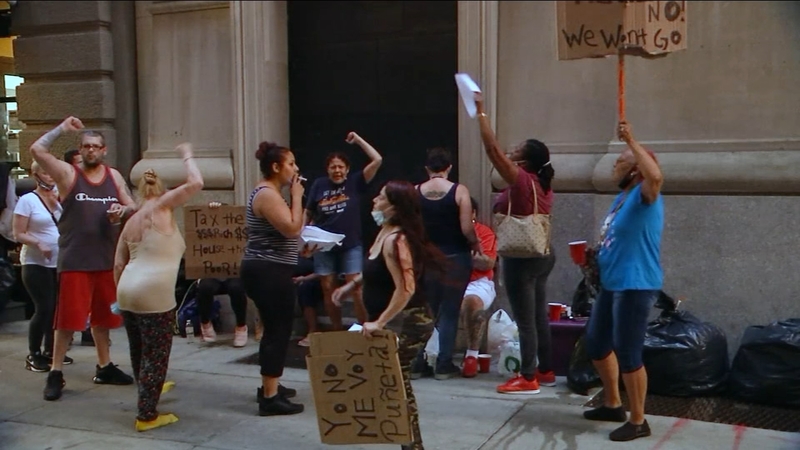 MIDTOWN, Manhattan (WABC) -- Homeless families are being moved out of the shelter in Manhattan where they have been living for months.

New York City is relocating them to alternate shelters in order to make way for a group of homeless men about to be booted from the Lucerne Hotel on the Upper West Side where wealthy neighbors launched a pressure campaign on Mayor Bill de Blasio.

The families will have to be out by this weekend and what doesn't fit in a suitcase is being dumped out with the trash.

"I don't know where we're going. They just told us we gotta leave and we gotta start packing and we have basically no time," resident Norma Torres said.

For ten months Torres and her mother have been staying at the Harmonia shelter, a haven for homeless families without kids, in a former boutique hotel on 31st Street.

As for the men, the City had moved them to the Lucerne to improve social distancing during the pandemic, but now they're moving out, the mayor says, to reduce dependence on hotels to house the homeless.

"Our policy is to get people out of hotels so this was the right time to start to move away from hotels," de Blasio said.

Except, they're just transferring them to the Harmonia, another hotel, where Stephen Gonzalez has lived under rent control laws for decades.

"They're appeasing the people up there and because there's no community here, they're dumping them here," Gonzalez said.

"Uproot our families just to accommodate wealthy people. That's not fair. We all deserve respect. We're all human at the end of the day," Torres said. "We don't have any fancy lawyers but hopefully we can get enough people we can be one giant fancy lawyer hopefully. You never know we're gonna try."

The city has promised no one will be turned out into the streets under any circumstances, saying families will continue to receive services at alternative shelter locations.

But all they've told the human beings affected is that they have to be out of the Harmonia by Sunday.