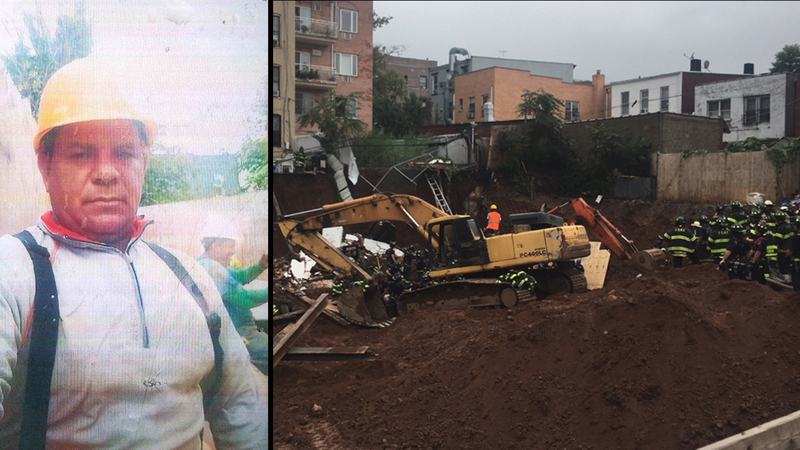 SUNSET PARK, Brooklyn (WABC) -- Six people and three companies are now facing charges in the death of a construction worker at a site in Brooklyn last year.

Luis Sanchez Almonte was killed in a wall collapse while working in a trench in Sunset Park on September 12, 2018, and authorities say the subcontractor on the site willfully ignored a cave-in warning issued shortly before the collapse and has a criminal history including a bribery charge in 2015.

Brooklyn District Attorney Eric Gonzalez announced Thursday that three individuals and two companies have been indicted on manslaughter and other charges, while three additional defendants were indicted on lesser related charges.

"Despite a construction-related conviction for attempted bribery a few years earlier, the construction company operator allegedly continued to play fast and loose with safety protocols, taking shortcuts to increase profit margin, this time with deadly consequences," Gonzalez said. "We allege that the dangerous conditions at the site, which had been reported by laborers and neighbors, were ignored by these defendants and directly led to the death of Luis Almonte Sanchez, a 47-year-old family man."

The District Attorney said that, according to the indictment, between April and September 2018, construction workers employed by WSC Group Inc., performed demolition, excavation and foundation work at the construction site at 714 39th Street in Sunset Park. The construction involved removing a one-story industrial building and replacing it with a four-story manufacturing and community facility, including a new cellar level that would serve as an underground garage approximately nine feet below the first-floor level.

It is alleged that, despite repeated warnings of dangerous conditions at the site from workers and adjacent property owners, Jiaxi Liu refused to stop work at the site.

On September 12, 2018, at approximately 2 p.m., a portion of a support of excavation system and an existing masonry wall adjacent to residential apartment buildings collapsed, trapping one of the construction workers who was performing foundation work in the immediate vicinity.

That worker, Luis Almonte Sanchez, 47, an employee of WSC Group, was struck by one of the underpinning pin sections, which weighed between 15,000 and 45,000 pounds and was buried under the collapsing debris. First responders couldn't recover Sanchez's body until the following day due to unstable conditions at the site, which were worsened by significant rain.

According to the indictment, Jimmy Liu ran WSC Group, the company hired to perform the excavation work and it was his responsibility to give instructions to his foreperson and workers; His brother, Tommy Liu owned WSC Group; Wilson Garcia was the foreperson at the site; Paul Bailey was an engineer, acting as the Special Inspector at the site, and whose responsibility was to oversee the work and ensure that all building and administrative codes were complied with and that the construction site was safe for workers; Wilson Garcia served as the foreperson and "competent person," designated to identify hazards and take immediate action to correct the hazards on site; Cheung-Mui was licensed as a construction superintendent by the DOB and was required to be on site to maintain a safe job site, maintain compliance with approved construction documents and perform daily site visits; Cindy Chai was the bookkeeper at WSC Group LLC and is only charged in connection with financial crimes alleged in the indictment.

It is alleged, according to the indictment, that the defendants were obligated by law to ensure that the construction site was in compliance with regulations promulgated by the DOB and Occupational Safety and Health Administration to ensure the safety of the work site, but, in fact, the site was not in compliance and, furthermore, the defendants failed to follow the design plans submitted and approved by the DOB. They allegedly solicited new plans, which were not submitted to DOB, but ultimately didn't follow any plans, leading to hazardous conditions at the site. Among the issues: the excavation was too deep, the underpinning system wasn't installed properly and safe bracing procedures were not followed.

Furthermore, it is alleged that in the days prior to September 12, 2018, Jimmy Liu and Garcia were informed by several of their workers of a number of potentially dangerous conditions, including that the rear wall was moving forward and that it had to be further braced with another beam across the lower portion of the wall in order to stop the wall's movement.

Also, it is alleged, Jimmy Liu and Garcia were notified by a resident who lived immediately adjacent to the rear wall that her patio and garage had caved in. It is alleged that, despite those warnings, Jimmy Liu and Garcia refused to direct the workers to install additional bracing and never halted work at the site in order to assess or remedy the conditions. Nor did they notify DOB about the conditions.

Instead, it is alleged, they ordered workers to continue working on the underpinning at the rear of the site and in the days immediately preceding the collapse allowed a trucking company to continue to remove truckloads of dirt during a heavy rain storm, further destabilizing the site and causing the fatal collapse.

Additionally, it is alleged, some of the same individuals and companies were involved in another construction project located at 1759 Bay Ridge Parkway in 2017-2018, that was subject to numerous safety complaints that led to a DOB inspection, which uncovered numerous violations, and resulted in a stop work order. It is alleged that work continued at the site despite the order.

Finally, it is alleged, that WSC defrauded the New York State Insurance Fund of nearly $47,000 by making false statements about their employees, and that it also committed tax fraud by failing to file taxes between 2015 and 2018 and owes more than $28,000 for 2015 and 2016.