WABC
By Eyewitness News
EDGEWATER, New Jersey (WABC) -- A group of children managed to escape with the help of a good Samaritan and the police when fire ripped through their dance studio in New Jersey.

The fire broke out inside a complex on River Road in Edgewater Monday evening and spread to the studio where the children were rehearsing.

The children were trapped inside the burning building until a good Samaritan and police officers were able to bust through the front window.

"We didn't have that much time," good Samaritan Toni Nehmi said. "By the time we got them out, the fire department had put the ladder down, and then the fire was everywhere. It was like a couple of seconds, and then you couldn't even stand up there."

Trapped on a balcony with the fire closing in, the children first started throwing clothes and backpacks from the balcony as adults below scrambled to get ladders.

"I knew there was no time," Nehmi said. "A couple of seconds, and I can see smoke coming behind them. I say, 'You know what, there's no time. We have to do something immediately, otherwise we're going to lose these girls.'"

The children started to climb over the railing but quickly realized the ladders were too short. The first child hung down and barely reached the ladder below with his feet, but he managed to find it and climb down to safety.

But others could not reach the ladder and started to drop to the ground, desperate to escape.

Remarkably, no one was seriously hurt, though about 15 children were treated for minor injuries.

"Our first responders here, everyone, did a wonderful job getting those kids out, getting the building evacuated and getting the fire contained," Edgewater Mayor Michael McPartland said.

The fire sent plumes of smoke in the air that could be seen for miles, and the flames quickly burned through the building that also housed a car wash and a restaurant in addition to the dance studio.

It took firefighters hours to get the flames under control. The cause of the fire is under investigation. 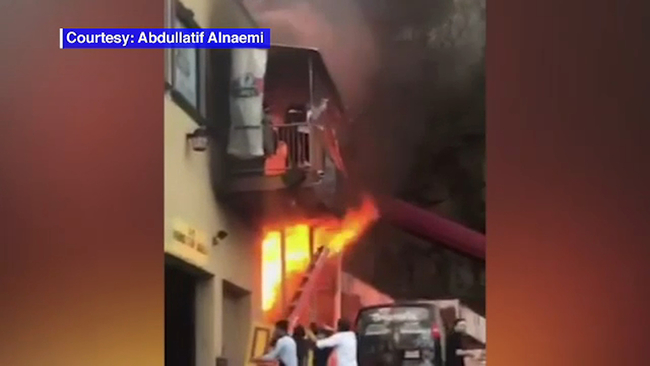