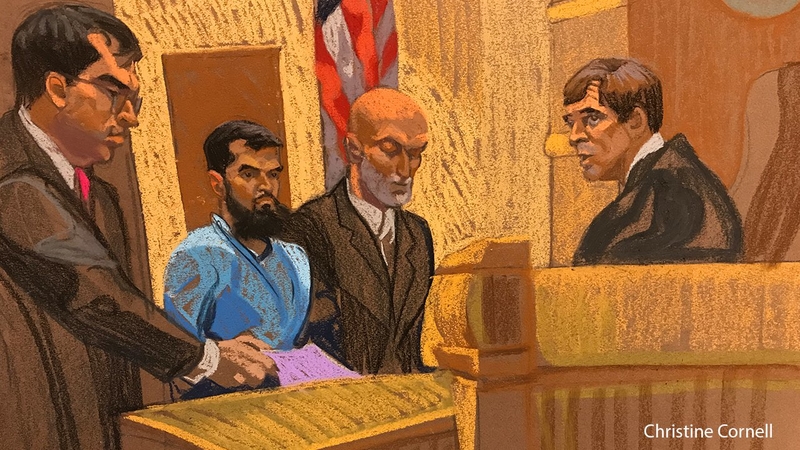 Man from Queens accused of trying to join ISIS

OZONE PARK, Queens (WABC) -- A 22-year-old man from Queens is under arrest and facing charges after allegedly trying to enter Syria to aid ISIS.

Parveg Ahmed, of Ozone Park, was taken into custody Monday as the result of an investigation into his travel in June. Authorities say he flew to Saudi Arabia, purportedly to celebrate an Islamic religious holiday, but then attempted to travel to Syria to enter ISIS-controlled territory.

He was detained in a Middle Eastern country bordering Syria.

"Ahmed sought to take up arms with violent terrorists who have killed numerous innocent victims, including Americans," acting U.S. Attorney Bridget Rohde said. "This office and our law enforcement partners will continue to work tirelessly to arrest and prosecute extremists before they are able to threaten the United States and its allies."

Prosecutors say Ahmed had repeatedly expressed support on social media for ISIS and for individuals who provided support to the foreign terrorist organization's mission of violent extremism.

Agents obtained a search warrant for Ahmed's personal computer in July and reportedly learned he had viewed or listened to recordings of radical Islamic clerics Anwar al-Awlaki, a United States-born cleric and prominent leader of the foreign terrorist organization al Qaeda in the Arabian Peninsula, who was killed on or about September 30, 2011, and Abdullah el-Faisal, a Jamaican-born cleric, who was found guilty in the United Kingdom of solicitation to commit murder and for preaching to followers to kill individuals, including Americans, because he deemed them to be enemies of Islam.

On Monday, agents obtained a search warrant for electronic devices found in Ahmen's possession when he was detained attempting to travel to Syria. Authorities say examination of the devices revealed:

--Messages sent to third parties expressing a desire to travel to ISIS-controlled territories.

--A message explaining that Ahmed planned to join ISIS in Syria to wage violent jihad stating, "(W)e have made it to Dawlatul Islam (ISIS) in Syria. In sha Allah (God willing) we will join the Jihad very soon and in Sha Allah (God willing) we will then join the ranks of the Shuhuda (martyrs). The West has invaded the land of the Muslims and is constantly attacking it." (note: Spellings are in original, and bracketed words and letters are added for clarity).

--An internet browser history that indicated Ahmed was researching maps of ISIS-controlled locations.

Ahmed was deported to the U.S. on Monday and was arrested at John F. Kennedy International Airport.