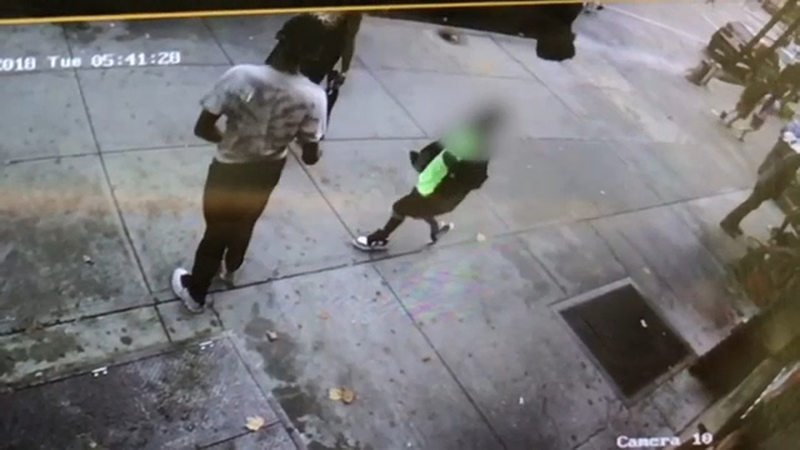 MOTT HAVEN, Bronx (WABC) -- The New York City Police Department is looking for an individual accused of jumping an 8-year-old boy and stealing his cell phone Monday evening just before 6 p.m. in the Mott Haven section of the Bronx.

Some of the incident was captured by nearby surveillance cameras.

Eyewitness News spoke to the boy and his mother who said the man had followed the boy on his way home from camp and called him over to ask for directions.

The boy told Eyewitness News he told the man, 'he didn't know,' and turned to go into his apartment complex.

Surveillance video shows the man following the boy inside.

The boy says he was told to hand over the phone, "'If he didn't want to get hurt.'"

"I didn't want to get hurt," said the boy, talking exclusively with Eyewitness News. "My mom always said it's not worth it. So I just gave him the iPhone 6S."

Surveillance video also shows the man walk out of the residential building and start running.

Do you recognize this guy?? He’s accused of pretending to need directions then jumping an 8-year-old in the Bronx and taking his phone. @NYPDnews is looking for him. @ABC7NY pic.twitter.com/variiSnwUT

The crime happened at St. Ann's Avenue and East 139 Street.

"It was so terrifying. It just made me want to hug him and hold him and not let him go," said Adrian, the boy's mother, whose full name Eyewitness News is withholding.

Adrian said she is a single mom who works full time and often picks up extra shifts to make ends meet. She relies on the iPhone that was stolen to keep track of her son's whereabouts and make sure he gets home safely.

She is now changing her schedule to work less so that she can personally take her son to and from school and camp but that will be a financial hardship.

"I really feel like now I'm scared," Adrian said. "I'm not doing any more overtime because I don't want him to walk home by himself or to walk to camp by himself."

People in the neighborhood said crime has been an increasing problem but described this incident as outrageous.

Adrian said she is grateful her son is okay but also sad he had to learn a tough lesson so young.

Police said the male suspect seen in the surveillance video is about 150 pounds and 6'0" tall.

Anyone with information in regards to this incident is asked to call the NYPD's Crime Stoppers Hotline at 1-800-577-TIPS.