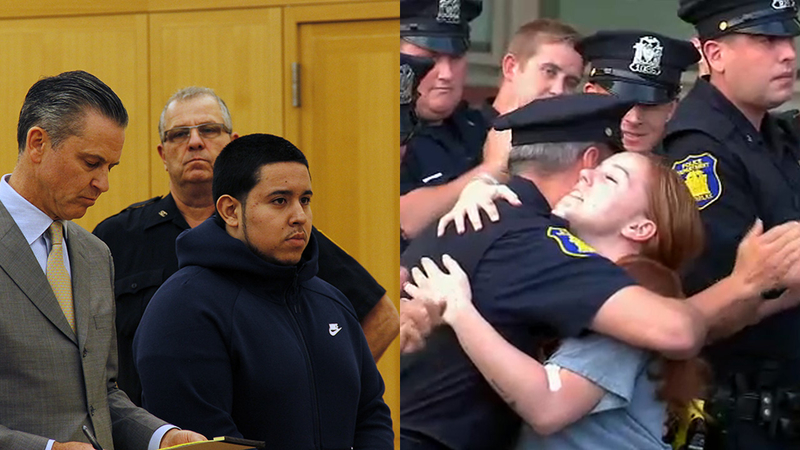 WHITE PLAINS, Westchester County (WABC) -- A man who pleaded guilty to shooting a Yonkers police officer two years ago was sentenced Friday to 24 years to life in prison.

Frank Valencia, of New Rochelle, opened fire on Officer Kayla Maher as she and her partner approached his car around 8 p.m. on September 25, 2017.

The officers were responding to calls of a suspicious vehicle that had been sitting for over an hour at Marshall Road and Ridge Drive with two men inside.
Maher, who was shot in the chin, read an impact statement in court before the sentencing.

"I honestly don't think I've ever been afraid of anything, and within seconds, some coward took every sense of security and safety I had so naively had," she said. "There isn't a room I enter or a person I now encounter without sizing them up. There isn't a sudden loud bang that doesn't make me jump."

She also expressed outrage at the sentencing.

"Twenty-four years for a guy that not only possessed a firearm and shot at multiple police officers with every intention of ending our lives, but a psycho who bought the pieces and manufactured the gun, that's a joke," she said. "I hope the next 24 years make you feel as uneasy as you've made me feel for the last year and a half. I hope you never feel safe."

Valencia pleaded guilty to two counts of attempted aggravated murder of a police officer and criminal possession of a weapon.

"Justice has been served," District Attorney Anthony Scarpino said. "Convicted felon Frank Valencia will be off the streets, in prison, paying for the pain he inflicted on Police Office Kayla Maher and those who dodged bullets that same day. That attack was not on one person, it was on the entire Yonkers Police force. As of today, Valencia will serve the prison time he deserves. We are grateful that now Detective Maher is alive and well and continues her service to others."

Maher was in the hospital for two days, and Eyewitness News was there as she was released amid a sea of blue as fellow officers lined the sidewalk and cheered.

Valencia, then 18, was injured in the ensuing shootout with police and taken to Westchester Medical Center, where he was arraigned on charges of attempted murder.

The other person in the car, Jerry Reyes, was arrested at the scene and charged with criminal possession of a weapon. A loaded Glock semi-automatic handgun, a high-capacity magazine and numerous bullets were recovered at the scene.

Reyes pleaded guilty to a misdemeanor weapons charge and will be sentenced in April.