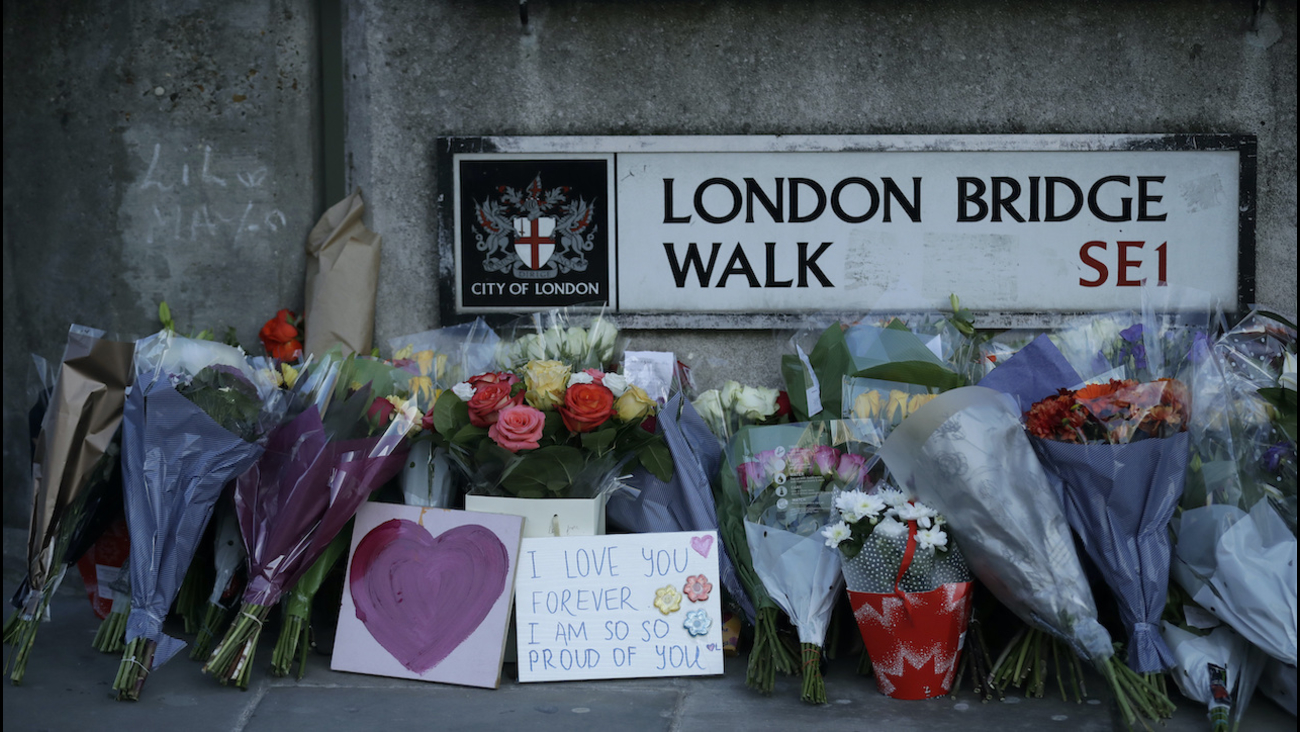 In this Monday, Dec. 2, 2019 file photo, tributes are placed by the southern end of London Bridge, three days after a man stabbed two people to death in London. (AP Photo/Matt Dunham, file)

LONDON -- A mysterious figure who used a rare narwhal tusk to help subdue a knife-wielding extremist on London Bridge last month has been identified as a civil servant in Britain's Justice Ministry.

Darryn Frost ended his silence Saturday, telling Britain's Press Association that he and others reacted instinctively when Usman Khan started stabbing people at a prison rehabilitation program at a hall next to the bridge on Nov. 29.

Frost used the rare narwhal tusk to help subdue Khan even though the attacker claimed to be about to detonate a suicide vest, which turned out to be a fake device with no explosives. The intervention of Frost and others helped keep the death count to two. He said another man used a chair as a weapon in the desperate struggle.

"When we heard the noise from the floor below, a few of us rushed to the scene," the 38-year-old said. "I took a narwhal tusk from the wall and used it to defend myself and others from the attacker. Another man was holding the attacker at bay with a wooden chair."

He said Khan had a large knife in each hand and pointed at his midriff.

"He turned and spoke to me, then indicated he had an explosive device around his waist," Frost said. "At this point, the man next to me threw his chair at the attacker, who then started running towards him with knives raised above his head."

The confrontation quickly moved onto London Bridge, where Frost and others - including one man who sprayed Khan with a fire extinguisher - managed to fight the attacker to the ground until police arrived.

The extremist, who had served prison time for earlier terrorism offenses, was shot dead by police moments later after he threatened again to detonate his vest.

Frost said he was withholding many details out of respect for the victims and their families and because of the ongoing investigation. He paid tribute to Saskia Jones and Jack Merritt, the two young people stabbed to death when the attack started.

"In reading about their lives and work I am convinced they represent all that is good in the world, and I will always feel the deep hurt of not being able to save them," he said.

Frost praised those wounded in the attack and said some had refused treatment until the more severely hurt were cared for.