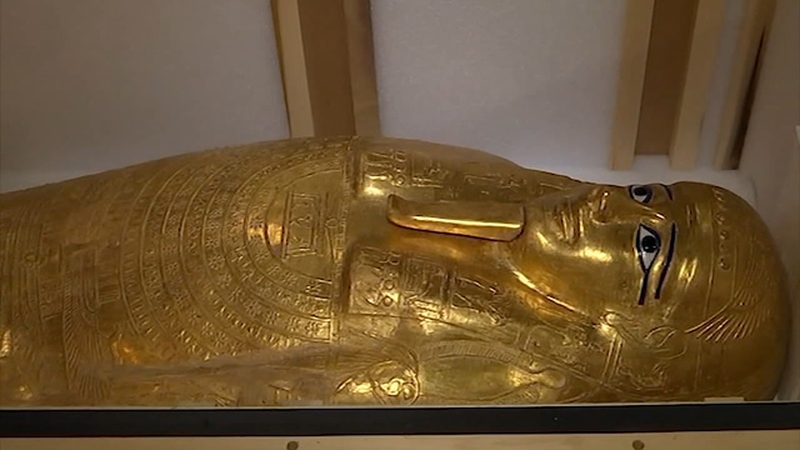 UPPER EAST SIDE, Manhattan (WABC) -- A priceless golden artifact that was stolen in 2011 and on display at the Metropolitan Museum of Art was seized and sent back to its rightful owners in Egypt on Wednesday.

The gold coffin, which is believed to have once held the mummy of Nedjemankh, is now finding its way back to the Egyptian people after a seven-year investigation that spanned five countries.

"The coffin was illegally transported to a warehouse in Dubai," Manhattan District Attorney Cyrus Vance Jr. said. "And subsequently shipped to Germany for restoration and then went to France for sale."

The Manhattan District Attorney's Antiquities Trafficking Unit worked in conjunction with Homeland Security investigators and Egyptian officials in tracking the priceless artifact, which was purchased by the Met for $4 million in 2017.

"This coffin is just one of hundreds of antiquities stolen by the same multi-national trafficking ring, so you may well see a few more significant seizures of prominent antiquities in months and years to come," Vance Jr. said.

The Met cooperated with investigators in the recovery and now repatriation of the coffin to Egyptian officials during this ceremony.

Several thousand stolen antiquities -- worth more than $150 million dollars -- have been recovered by the DA's Trafficking Unit. Among them was a valuable set of Greek coins and a marble sarcophagus fragment also recovered in other investigations.

"Each item is a valuable piece of cultural history," Vance Jr. said.

The DA's office will not reveal if arrests are imminent in the ongoing investigation. Homeland Security officials say it is one of the oldest crimes in history.

"The relative ease of doing business through online markets at any time and any place has helped this type of theft to become a global phenomenon," said Peter Fitzhugh, the assistant special agent in charge of the investigation.

Persistent investigations are now bringing about the recovery of these priceless treasures.