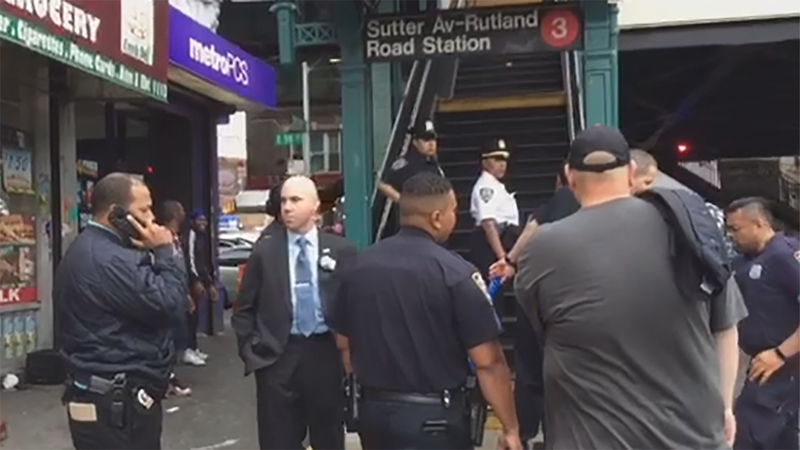 BROWNSVILLE, Brooklyn (WABC) -- The search continues for a gunman who shot an off-duty MTA employee on board a subway train in Brooklyn Tuesday.

The shooting occurred just after 6:30 p.m. on a southbound 3 train at the Sutter Avenue-Rutland Road station in Brownsville.

Police say two groups aboard the train began fighting, and a teenager pulled out a gun and fired at least one shot. The bullet grazed 47-year-old MTA supervisor Carlo Thorne in the arm. He was taken to Kings County Hospital in stable condition.

Police say he had just left work and was on the way home.

"One of the groups exited the train and displayed a gun and fired into the train, striking the victim, at this time an unintended target," NYPD Chief of Investigations for Brooklyn North Michael Kemper said.

A token booth clerk alerted police to the shooting by activating the emergency communications system.

Three people of interest are in custody who may have been involved in the initial fight, according to police. They range in age from 17 to 23. The gunman remains at large.

Investigators say there are indications that the incident was gang-related.

"At least one of the persons that was stopped fleeing the scene is very interesting to me, I'm not going to go into his name or pedigree," said NYPD Chief of Detectives Dermot Shea. "But he is a local gang member from that area, and then when I start to connect pieces, we have other incidents involving that same gang. So it looks like what it is at this point in time, more gang violence."

"This is a horrible incident, and we're all pulling for a speedy recovery," said Lhota. "Transit workers are on the front lines of moving millions of New Yorkers every day, and this shouldn't happen to anyone."

Thorne is expected to recover from his injury.